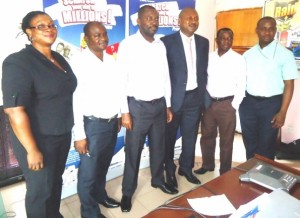 This is not a palatable story coming from some consumers of products manufactured by one of the companies that manufacture household items in the country, SC JOHNSON. These consumers, majority of who are loyal ones that have been with the company over the years are complaining bitterly about a way the company has tricked them using a fake promo as a bait.

As the story goes, months back, SC Johnson based at Isolo area of Lagos went to town with a promotional campaign of one of its products namely Raid Insecticide in which different items were publicized that the consumers will win at the end of the promo which according to the company will end in the month of August. The promotion campaign was tagged ‘Scratch n Win’.

This no doubt made the purchase of Raid increase and eager customers started purchasing more in order to win prizes. Trouble however started when some of these consumers discovered some foul play in the promo.

According to some of them, in order to win any of the prizes, the consumer will have to purchase a unit of Raid, open it, get a voucher, send it to the sort code stated there and a reply will be sent indicating the prize that has been won. Unfortunately many of these customers after buying many units of Raid and sending the code stated in the voucher, they get their money deducted and after the deduction, instead of stating if they have won anything or not, the response they get is ‘invalid entry’. This they see as a big scam as they suspect that the network providers are conniving with SC Johnson to defraud them.

When SC Johnson’s office was contacted to speak on the development, a member of staff who spoke under condition of anonymity acknowledge that the issue is not a strange one to them in the office as they have received several calls from different people lodging the same complain and registering their disappointment. She further explained that although the company spent a lot of money meant to ensure the overall success of the promo, its unfortunate that this issue arose. She however blamed the crises on the consultant that handled the promo for SC Johnson.

We however sought for the contact of the consultant from her but she declined to give out the details saying ‘I’m sorry, I won’t be able to give you that’.

In our next edition, we will bring your way another product just like the case of Raid on which SC Johnson is running a promo and consumers are already saying its another fraud. Keep a date with us.