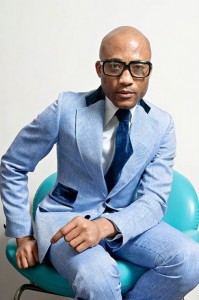 The internet was on fire weeks back when two Lagos big boys and a Nigerian-born London based blogger took on themselves with one clearly emerging the winner so far, because as at the time of going to press we were yet to get the response of the other side.

The three gladiators are Lagos big boy and celebrity blogger Noble Igwe, menswear designer Mai Atafo and London-based Emmy Collins. Mai Atafo is the most popular men’s designer currently on the block while Emmy Collins shuttles between Nigeria and London. For some time now the nagging question of who is better between Emmy London and Mai Atafo has been on the lips of quite a number of fashionistas.

Even though their cuts and pattern differ, they operate principally in the men’s world and hence the competition is vital. For Mai Atafo he principally likes to operate like a lot of his contemporaries would do. He believes in the power of celebs and so is a close friend of many celebrities. He was the designer who dressed Tuface and his wife at their Dubai wedding. He is also known to lend out clothes to many celebs and give huge discounts to a lot of known faces especially the Nollywood and hip-hop artistes. This way he has chosen to use celebs to promote his wares and it seems to be working for him.

Then there is the sharp talking Emmy Collins of London who does not really subscribe to such policy. In Emmy’s rule book, exclusivity is the name of the game. His clothes are not only fabulously cut but quite pricy considering the fact that they are tailored and made in the same factory in Aldgate UK where world class designers produce theirs. Emmy does not believe in giving his expensive clothes to any Tom Dick and Harry in the name of clothing a celeb to promote his brand. NEVER! He would say and this is permissible because in the international scene its different folks for different designers. New York-based designer Vera Wang loves not only to clothe celebs but at times escort them to functions, so also Italian style icon Donatella Versace. But the likes of vibrant world-class designers such as high end Victoria Beckham will never give her outfits or dress to any celeb, no matter who for free. She has a no-freebies (a fashion term for free clothes and accessory from a designer to a celeb) policy. Whether  you are JLO or Beyonce you must pay for her clothes. It then seems obvious why Naija-born Emmy Collins is not into giving any Iyanya or Olamide his clothes for free. This is obviously Emmys ‘sin’ because celebrity blogger Noble Igwe ignited an online war by going on Twitter to call Emmy Collins a failed designer who cannot match the likes of celeb-friendly Mai Atafo. 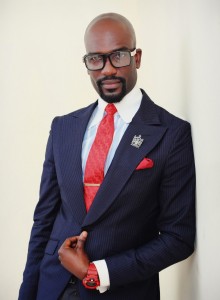 The many uncomplimentary remarks by Noble Igwe to Emmy are too much to be contained here but Noble went ahead to christen Mai the best men’s designer and Mai in return also while accepting such threw veiled insult at Emmy Collins by saying “for more of my works check out my blog, sorry my website,” referring to Emmy who has become a popular blogger amongst a lot of the fashion-paced Naija internet followers. Mai was trying to say his works are visible in his websites and not on blog like Emmys, but they had forgotten that no one picks a fight with courageous and fearless fighter like Emmy Collins and takes the trophy. If in doubt ask the management of a national daily whom Emmy Collins drag to court after they cancelled a fashion show he was billed to participate in and sued for huge damages! A feat no Nigerian designer dare do.

Emmy returned gun blazing, spitting fire: Emmy Collins first of all was unapologetic about his style of not lending clothes to what he called so called celebs. He then went on to reveal how Noble Igwe had approached him for clothes and also tried talking him into lending clothes to his clique of hip-hop artistes. When that did not work as Emmy refused insisting that his target was not the like of “2 kobo celebs” but those style connoisseurs who dwell in exclusivity and appreciate classic cuts. Noble then gave him a bounced cheque after purchase thereby defrauding him. Ouch! In other words poor Noble Igwe cannot afford the likes of Emmy so decided to present a cheque that was worth only its paper. Emmy also went ahead to portray Noble as a traitor who backstabs his hip-hop friends such as Banky W. Emmy went further to return it to celeb designer Mai Atafo by saying if Mai indeed was referring to him then he will spill Mai’s closest secrets not known to mere mortals.

This fiery response from Emmy Collins not only caused a major uproar online but obviously portrayed Noble Igwe as a cheap skate whose specialty is fake lifestyle.  So far in this fashion war which reminds us of when 2twoworld class designers fought dirty in New York, Emmy is leading as there HAs been no official response from either Noble or Mai Atafo. Considering that Noble Igwe will be praying Emmy does not hand over the cheque to EFCC for prosecution we do not expect to hear from him soon, but we shall keep you updated.