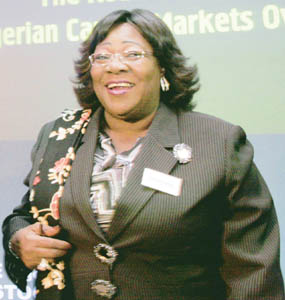 The former head of the Nigerian Stock Exchange (NSE), Ndi OkerekeOnyiuke, does not officially hold the title Doctor. Based on the fresh evidence which shows that the credentials she presented to the NSE, and on which basis she was

recruited into the NSE were forged and contained a number of false and misleading claims, which one senior US official qualified as “grievous and embarrassing” to warrant criminal prosecution.

Ms. Ndi OkerekeOnyiuke was recruited at the NSE in 1983 on the basis of her curriculum vitae which claimed that she had obtained a Ph.D in Business from The Graduate School and University Center of The City University of New York in the United States of America . She also paraded sterling professional experience, claiming to have worked at the New York Stock Exchange (NYSE), before returning home to serve her fatherland.

In a letter dated January 18, 2011 and written in response to routine enquiries initiated by the US Securities and Exchange Commission, (SEC), in furtherance of its regular due diligence on notable Stock Exchanges around the world, Vincent J. De Luca, Director of Student Services, Senior Registrar at the university’s Graduate School and custodian of student records at the Graduate Centre, averred under oath of perjury that: “On January 18, 2011, I caused a search to be conducted of our student records (including graduation records) at The Graduate Center, at the request of the United States Securities and Exchange Commission, to determine if Ms. Ndi OkerekeOnyiuke was ever enrolled in the Ph.D Program in Business and if she received a Ph.D in Business at The Graduate Center.

This lie was laid to bare after media reports quoted NYSE officials denying having any records of her passage there. That story, which included a published deposition by Andrew Richman, Chief Counsel Litigation, Legal and Government Affairs at the NYSE Euronext (“NYSE”) obtained from a High Court Registry revealed that: “on Oct. 4, 2010, a search…conducted of NYSE’s personnel records, at the request of the US SEC (United States Securities and Exchange Commission), to determine if Ms. Ndi Okereke Onyiuke ever worked at the NYSE” proved futile.

Mr. Richman further affirmed that: “On Oct. 7 2010, I caused a supplemental search to be conducted of Securities Industry Automation Corporation (SIAC), at major times a majority – owned and later wholly owned NYSE subsidiary…After a diligent search of both electronic and paper files including files relating to former employees, NYSE staff found no record that Ms. Okereke Onyiuke ever worked at SIAC of NYSE”. Richman also concluded his report of findings with a declaration that, “I certify under penalty of perjury that the foregoing statements made by me are true and correct”.

The overwhelming evidence indicates that Ndi Okereke Onyiuke’s credentials, on the strength of which she was employed as Research Manager by Apostle Hayford Alile, then Director General of the NSE via letter with Ref. No. NSE / 11 / 86 and dated Jan. 4, 1983 were forged. Her career at the NSE, predicated on such falsehood amounts to a scam, a national swindle of unimaginable proportions and for which she ought to be prosecuted for fraud and perjury.

A Nigerian government official disclosed that if these allegations are proven to be true, then the Nigerian Minister of Justice and Attorney General of the Federation will request information from the NSE as to whether Ndi Okereke-Onyiuke has been receiving additional remuneration for the doctorate title in order to open criminal charges against her and to seek restitution.