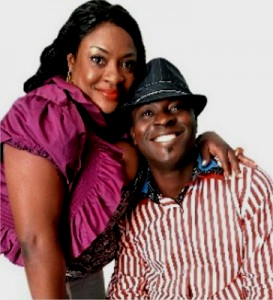 The home of recently married actress Foluke Daramola, and activist Kayode Salako may be experiencing one of the turbulent moments of marriage. Recall a couple of weeks ago, the newly wed exchanged marital vows in the presence of family and friends. The solemnization was indeed one of the most controversial weddings of 2013 but that actually is not the gist for the day.

A lady journalist and founder of Lady of Africa Empowerment and Advocacy Foundation, Bukola Fasuyi, who claimed she introduced Foluke to the husband, Kayode, has come out to reveal the marriage was built on deceits and lies. But in a swift reaction, Kayode Salako in an interview with E24-7 magazine’s Biodun Kupoluyi said, ”Bukola is a devil’s agent and please don’t mind her. Yes, she introduced Foluke to me but she should step aside now that we are married. She claimed Foluke is using juju on me, but you know what, if that is true, I, Kayode Salako will know. I’m a real man. But if truly she’s using juju, I need more of her juju; you know why? She has added value, brought me a lot of blessings.

He recalled how she met Bukola who introduced her to Foluke. “Yes, when I came back from abroad, I met Bukola; then I was lonely, my life was boring and we met. I liked her because she was so passionate about my Fasholamania project; she showed a lot of enthusiasm and we got so close. It was at a time my wife was very boring, so I asked her out, but she declined.

“She told me that she liked me but she would not date me for two reasons: one that her intentions will be misconstrued, two, it will be a burden on her that she will love me to the extent that she would love to marry me but that she had a friend, an actress, that she’s different from the pack. She gave her name as Foluke Daramola. “Really, I never believed her that she could introduce Foluke to me. She’s one of the very few actresses I admired.

“Eventually, we met at Mama’s Place. Shortly after she called Foluke to join us and she did. We had fun, wined and dined together. That was all that night. The rest as they say is history. I don’t know why she’s into this campaign of calumny now. Why call Foluke names? What has she done to her? If Foluke is into juju, she should be a millionaire like some of her colleagues whose lifestyles are well known to us. I met Foluke a poor girl with her sanity and pride intact. I don’t know what she wants from all these. Foluke’s life is an open book and I like it. I have taken my decision and the action to live the rest of my life with Foluke and I’m ready to face the consequences of my action.”

“I have chosen not to talk but I respect you and your medium and I want to assure you that at the appropriate time, I will grant you an interview. Yes, Bukola came to me, she told me about her project and that she needed money. She believed I have so much that I should be giving her now. But there is one thing about me; my life is an open book. I will not respond more than that. Let her go ahead with her tales. I know I have done no wrong. I appreciate the fact that she introduced me to Kayode but that does not mean she has to continue to call the shots. It’s just important she steps aside now that we are married. That should not hurt.”

Bukola disclosed that Foluke has really offended her. She alleged that she went too far in the romance that led to the marriage. “Foluke is an ungrateful element to me. I actually introduced her to Kayode, who, for a very long time was my ‘toaster’ but I told him I could not date him because I was not really interested and there was really no feeling for him. I told him I was not really interested because I was in a relationship. About the same time, Foluke had asked me to introduce her to someone who could help, so I introduced Kayode to her. I know he spends a lot on women, at least, he was dating a lady, Princess Bimbo Olagunju, and he was spending so much to keep the girl. The same Princess knew how much Kayode liked me but I was not interested.

“So precisely on February 13, 2012, I introduced Foluke to Kayode at Mama’s Place in Omole, Ikeja. I remember that I met Kayode during the heyday of Fasholamania, his campaign project for Governor Babatunde Fashola. I believed in the project and I knew he was committed to it not because he was getting any money.

“Anyway, Kayode and Foluke met, they were supposed to date each other but I never advised her to go and destroy Kayode’s home built over 15 years. I know Kayode dated Princess Abimbola currently in Dublin, but she never ventured to destroy his home. They dated for about five years. Yes, the wife knew, the heat was so much. They had issues about that but it never got to marrying him and sending his wife away.

“Princess knew Kayode wanted me, she knew I could displace her but I remained his friend. But because he was always telling us about his home, the areas his wife failed, Foluke worked on it and the result is the marriage which I advised her not to go into.

“I have conscience; fine, as a friend, I wanted the best for my friend (Foluke), but I know she threatened the home of Kayode; she was calling him at home at odd times, telling him how much she loved him. The next day after they met, he sent N100,000. That week, he sent more money, about N500,000. The money came at a time Foluke had accommodation problem in Marwa’s Garden, so he secured an apartment for her.

“At a point, I called Foluke to ask why… ‘Kayode’s wife barely left her home and you started to sleep in his Omole house.’ I tried to advise her that she should not marry the guy, that all she should do was get his assistance; I told her she should put herself in the wife’s shoes. Since she realised I was advising her, she withdrew from me, she started to avoid me. Yes, he was having issues with his wife but that was not enough to move in.

“On few occasions, he insisted he was still in love with his wife. I strongly advised her against such moves but she went ahead with the marriage plans. I remember that even while dating Foluke, he had issues with her; he complained about her lifestyle, that she was a fraudster bla, bla… but as a true friend I had to step in. Kayode had wanted to go away.

”Now I’m worried, my conscience is troubling me, I’m worried that I was indirectly or directly involved in the circumstance that led to the break of Kayode’s marriage. I don’t think Foluke should have gone this far, there are many factors involved, it was not ordinary and I want to tell the world that she does not deserve that man, I want to tell the world that I’m sorry that I did this to him and his family. I never advised Foluke to marry him; I just wanted him to help her out of her stormy life. I owe Kayode’s wife an apology and I know that I will go to her and say sorry soon. But before then, I owe it a duty to tell the world Foluke does not deserve Kayode and as the friend that introduced her to him, I’m sorry.’’

Asked why she’s spilling the bean now. She said “I just want the world to know the role I played, that I merely introduced her to Kayode to assist her, not to marry him.

“Yes, the wife made some mistakes too; I’m putting all these in a book I’m writing soon. It’s not enough for you to decline the advice or suggestions of your husband on how he wants you as his wife to dress. Why should the wife turn down the hubby’s invitation to go out together? Her claim that she’s a pastor and not cut out to live a life in the social circuit leaves room for the other women to step in. For Kayode, he got carried away, he loves the fact that Foluke brings him to spotlight, that makes him a newsmaker of sorts.”

But don’t you think you are guilty too?

The way this whole drama is unfolding shows that “bad belle” people do not wish Foluke Daramola well in her second marriage. So sad Bukola did not come out in time to lay these claims before Foluke Daramola and Kayode Salako sealed their marriage. Where was she when the two lovers were painting the town red together? Where was she when they were proclaiming affections and love to each other?