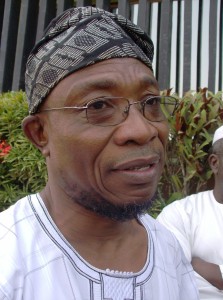 Osun State Governor, Mr. Rauf Aregbesola, says Osun State received only N55m from the Federation Account for the month of September, 2015. He said the money could not even settle the electricity bill of the government secretariat.

The governor said the development was evidence that Nigeria was experiencing an economic meltdown. He, therefore, called on residents of the state to return to agriculture as oil could no longer sustain the nation’s economy.

The governor said this during the inauguration of the new Ife/Orile-Owu 33KV feeder line at Orile-Owu in Ayedaade Local Government Area of the state, according to a statement on Sunday.

The governor said that apart from the price issue, crude oil was no longer selling as fast as it used to, adding that Nigeria must seek other sources of revenue.

He said, “We must at this point tell ourselves the truth; there is no money coming from the Federation Account, 34 million barrels of Nigeria’s crude oil are on the sea without buyers.

“Money coming from the Federation Account has reduced seriously and our hope of survival is in our hands, what our forefathers lived on was agriculture.

“We must now go back to the farms and work. We also need to pay our taxes so that the government can meet its responsibilities. For September, our state got N55.8 million. The money we received cannot pay for the power supply by IBEDC that we use at the state secretariat monthly.

“I want to use this opportunity to admonish us to return to the farms, what we used to rely on as a country and state is no longer there. Oil prices have now dropped seriously, even at about $41 per barrel from a price of over$ 100; Nigeria still cannot sell her oil in the international market.”

The governor said his administration recently gave hectares of land to the International Institute of Tropical Agriculture for farming and with the electrification of Orile-Owu and other farm settlements, there would be a boost in agriculture around these areas.

He urged the people of the state to pay their taxes to the government to discharge its duties.

However, the Peoples Democratic Party said the receipt of a paltry N55m by Osun State as the allocation from the Federation Account for the month of September was a confirmation that the state was highly indebted.

The spokesperson for the PDP in Osun State, Mr. Diran Odeyemi, who said this in a statement on Sunday, stated that the allocation remained N55m after deductions of over N1bn to service its debts were made from the source.

The PDP stated that the people of the state should know why Osun State got a paltry N55m while those in the same category with it got about N2bn.

The statement read, “We have been saying it long before now that Osun State has been slaughtered and eaten up by a gluttonous administration that has been in power in the last five years. The gimmick early this year was ‘Jonathan didn’t give Osun money’ but now, that cannot sell again, hence the confession.

“Before the confession by Ogbeni Aregbesola, three Nigerian newspapers on Friday, November 20, published an allocation table and Osun got N55m, after all deductions, and came last. The next state to Osun among the least earners got N1.5bn.

“What other signs do we need to see that Osun has completely fallen into a recession? But the people of Osun deserve to know from their leader how the state got into this quagmire. This leads us to the question of how much Osun owes. Mr. Governor said the state owes N88bn. But we insist the amount is far more than this.”

The party warned the governor against slamming high taxes on the people of the state, adding that the administration had already impoverished the people with its policies.

In a separate statement, the Civil Society Coalition for the Emancipation of Osun State also said that Aregbesola’s administration had no right to collect any taxes from the people of the state because of its failure to comply with the sections of the constitution which stipulates conditions for the collection of taxes.

The chairman of the group, Mr. Sulaiman Adeniyi, said this in a statement made available to our correspondent on Sunday.

He said the policies of the government had led to the total collapse of the economy of the state and accused the administration of massive corruption and failure to perform its duties to the people.