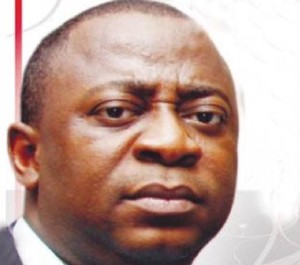 He left The News Magazine because of his passion for society reportage and today he has a fledging company that is into the publishing of different magazines such as the City People Weekly, City people Fashion and Style Digest, Today’s Fashion and City People Quaterly which are all market leaders in their categories. Dr. Seye Kehinde has built himself a name very synonymous with the media industry. The Ogun State born business entrepreneur has been there and seen it all as far as information dissemination is concerned. The handsome and chubby publisher of City People Magazine and Chief Executive Officer of the City People media Group took time out to have a chat with Global News duo of Bunmi Orija and Ayodele Oyekunle on the 18 years journey of City People and how the business atmosphere has treated the company so far. Glory be to God, Dr. Seye Kehinde’s effort in Nigeria’s media industry has been recognized by both government and corporate organizations.

How has it been in the media sir?

Well, let me be frank with you, the media has been challenging but we praise God Almighty that he has kept us for good 18 years. So what else should we be asking for than to thank him. But to be candid, it has not been easy being where we are today. Like I said, all thanks to God Almighty.

City People is a brand renowned for its seniority in the softsell industry, sir, when you took the decision to quit The News and set up City People, how was the feeling like then?

I must also be frank with you here, it was not easy for me when I wanted to set up City People. I took the decision once and for all. I approached a friend of mine who gave me the confidence that I should forge ahead. Then I have been writing as a student of the Obafemi Awolowo University, Ile-Ife. I wrote columns for notable newspapers back then and you know, we were been paid then for any interesting story we wrote, so I believe I have this writing prowess and that encouraged me really to go into the publishing business. So, City People Magazine was borne out of curiosity, it was not easy to set up such a venture but I thank God, today people respect us and we keep celebrating them the way we started.

The City people Media Group comprises of brands like the City People Weekly Magazine, Today’s fashion, Fashion and Style and City People Quarterly, how has it been, running these ventures together without a hitch?

Well, let me thank God that I have capable hands who have been very supportive in the couple of years we have started. Of course, you know it is not easy to do it all alone, but thank God I have brilliant people who are also have vast experience in the business and that is why the City People Media Group would always remain on top. But let me also emphasize here that you as a boss must also be hardworking because that is the only way to encourage your workers. So, It’s very fulfilling that the magazine is not only existing but that the business is waxing stronger and it has remained the market leader for over a decade now. It makes me very happy that we seem to have gotten right the Vision we came up with 18 years ago.

Sir, your company have a close knit with the entertainment industry, what was the motivation?

Anyway, I could only say that we are in the best position to place them where they belong. We have contributed our resources and efforts to ensuring that they get to the level they are today and I give all thanks to God that it is our joy that Nigerian entertainment industry today is ranked among the best in the world.

What was the Vision?

I have always believed that Journalism is all about People. I mean the core of journalism practice is woven around People and if the focus of any publication revolves around the lifestyles of people, it would be a huge success. I recall that since my school days, I have always been a people person. I always wanted to know about other people. I loved to read a lot about People, especially biographies and autobiographies. I always wanted to know more about individuals who are making waves in various sectors.

When did you conceive the idea of City People?

City People itself came as an idea when I was in my 300 Level at the University of Ife (now Obafemi Awolowo University). I was a History/Political Science Student then. I believed then there was a need to have a paper that would talk about People; that would talk about celebrities making news and all that. But then I was still a student so I never did anything about it. Later I remember that my best friend then, Sola Ojelade encouraged me further saying he thinks that the idea is a good one and that it would sell at any point that one decides to do it. So I just came up with the idea and I didn’t discuss the idea again until 1996 when I actualized my dream. When I started, I didn’t see it as a soft-sell. I just saw it as a magazine about People.

What was the inspiration behind the name City People?

It wasn’t easy for me to come up with a name. At that time, the way to come up with a name was often to adopt a name from existing publications in the UK or US. That is why you find out that most of the existing Nigerian publications picked names from foreign-based publications, The Guardian, The Times, The Tribune. Then I said part of my contribution would also be for us to come up with an uncommon but unique name. So, eventually the name came. I was driving on the Third Mainland Bridge one day to see a friend of mine. And it just occurred to me, then I asked myself a few questions; what is the purpose of what we were going to be doing? I said it is all about People. What kind of People? People in the City. So, I said City People. That was how the name came. I then told my friend when I got to him that City People is the name I came up with. He said it is okay and that it sounds interesting since it connotes what we want to do. That was how the name clicked.

How easy was funding?

It was very challenging. It wasn’t easy for people to believe in the idea. And to make matters worse, a lot of people wanted to know what City People would look like and I just gave them an idea that it was going to be like the defunct Fame Magazine or National Enquirer. At that time Fame Magazine was in existence and people couldn’t understand what I was trying to achieve. So, it was quite difficult. Eventually I had to, on my own, solely fund the project by putting together everything I had; selling my mum’s white Volkswagen Beetle car. If I had told her I was going to sell the car at that time I knew she wouldn’t have agreed. But I was already driving the car and I felt it was my own, so I sold it. I also sold my Daewoo Racer I bought to use for myself. And then, the project came on board.

Setting out on such an innovation, were you not wary of the outcome, the Certainty-for-Uncertainty factor?

I would not say I was afraid. Because, really, when I looked at it, something inside me told me this was the time to go for it. I think it was God. I listen to my inner self a lot and I know there are times I need to take some decisions. So oftentimes when something crosses my mind, I don’t bother whether it’s going to work or not; I just go ahead to do it. I just kept having the feelings then that it was the time to go; time to move on. It was the time for this idea to be actualized. And something kept telling me that if I didn’t do it then , I might not be able to do it again. And of course, as it kept coming back to me, I knew the dream was beyond me. It was like a calling and I knew it was just the time. Because, even at that time, nothing could have stopped me from doing it.I had that strong conviction and one thing that could have slowed me down then would have been my commitment to my colleagues at The News. I didn’t have a problem with anybody at The News. I just decided that it was the time for me to move. I had to explain to them that I needed to move and tell them this was an idea I came up with. As at that time, I had a dummy of what City People would look like. Even outside, people felt I was crazy, that how could I leave something we all started.

However I knew where I was going and at that time, I knew what I saw. When City People came, I analyzed the market and felt that certain things were missing there. The soft-sell magazine sector however looked very beautiful. But the problem the sector had at that time was that people could not trust the stories they were publishing. People doubted the credibility of their stories. You needed to deal with the issue of ethnicity. We needed to depend on the information being given. No confirmation. Libel was there. I now said to myself that I can do this reporting professionally by infusing all the rules of journalism. That was the unique selling point we were coming in with at that time. At least, soft-sell with a difference, by making sure what is written is true. Just like our colleagues do in the daily papers; running checks, talking to people and all that. I was set out with a strong determination which didn’t make me worry on uncertainty.