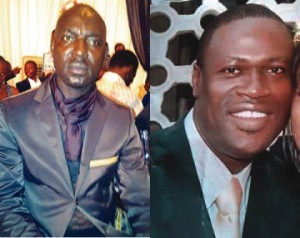 The last has not been heard of a kidnap drama that occurred between two prominent businessmen and friend Victor Adelakun popularly known as Ade Lexus and Adebayo Orekoya who is also known as Bobby Ibadan.

Global News gathered that before the brouhaha that pitched the duo against each other, they were said to be very close to the extent that they visited and discussed business with each other. However all these stopped when Ade Lexus accused his friends of plot to assassinate him on May 10, 2014.The questions on the lips of those who know the duo together is, what led to the ugly incident between the two because they were always together.
Further gathered that when Orekoya got married in 2005,Ade Lexus was there and they were dancing together to the music of King Wasiu Ayinde who performed at the occasion and it came as a surprise to many when Lexus claimed that he didn’t know his friend.
To also show that he is a pathological liar,in an interview he granted a national daily newspaper where he claimed that the wife of Bobby tried to seduce him,the source said further that which one should the public now believe or is it possible for the wife of a person you claimed not to know seduce a stranger through the breeze.
The insider alleged that there was no plan to assassinate him as he claimed. He revealed that those boys who were arrested by the police were at the club to just tell the whole world the kind of person that he is in the presence of their common friends.
It was revealed that the whole problems started when Ade went to Ghana where Bobby is residing with his wife to secure admission for him at the University of Ghana; when he got there he was welcomed by his friend and the wife helping him to move around but unknown to his guest he had another thing in mind and that is to seduce Bobby’s wife.
He was alleged to have secretly got the wife’s number and started sending love messages to her. The woman was surprised as to why her husband’s close friend would indulge in such a shameful act. When she couldn’t cope with the pressure from Ade Lexus, she allegedly informed her husband who was said to be angry but decided to keep calm and wait for the right time to confront him.
It was said that Bobby actually sent the boys to the club to confirm for him if Ade Lexus was actually there for him to go and tell their friends what he was up to and planning with his wife but he turned it against Bobby, declaring that he wanted to kill him. Those who are close to them claimed that Bobby would never attempt to kill anybody talk less of Ade Lexus and even queried what would his death benefit him.
However, to show that there was no case, when the case was taken to court, the court sat five times to hear the matter but we learnt that neither Ade Lexus, the police IPO I, nor his lawyers attended the sitting at the Magistrate Court 2, Ikeja.
In her ruling, the chief magistrate judge Mrs. Komolafe struck out the case on 18th February 2015 and discharged the defendant for lack of evidence.
What baffles so many people is why Ade Lexus instigated a case when he knew he would not follow it up. While many are wondering those who know the antics of Ade Lexus disclosed that he just decided to create unnecessary noise to discredit his good friend and since he knows that Bobby has a pile of evidences against him, he decided to run away.

Meanwhile,those who are very close to Ade Lexus disclosed that he enjoy dating married women and he has so many cases to his name which will be a story for another day.