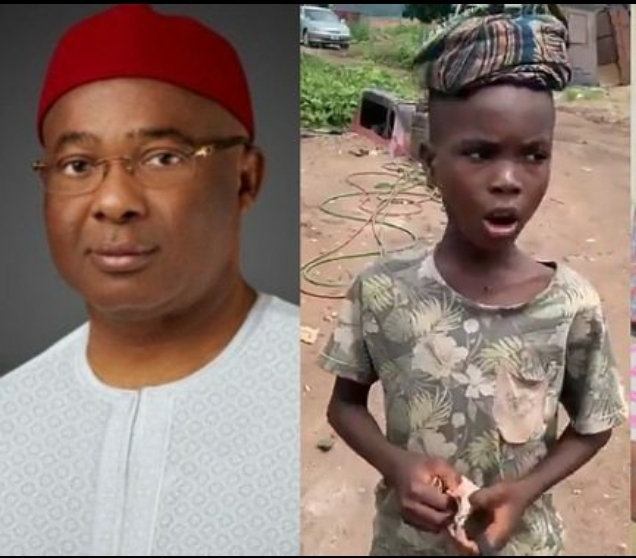 By Chima Azu
In the celebration of Father’s Day, the Governor of Imo state, Hope Uzodinma adopts a nine year old boy Joseph Oluomachi Opara, whose video went viral on social media where he was singing hymns in rendition to onlookers; the internet community went agog with his performance and also caught the attention of the Governor.
Joseph who sells coconut and pear was filmed while he was entertaining his customers with melodious voice singing Catholic hymns as he sells his goods. With his captivating voice, his audience couldn’t help but watch with awe at the rare talent of the boy.
In a response to the viral video, Governor Hope tweeted “In celebration of #FathersDay, I directed that little 9 year old Master Joseph Oluomachi Opara, the viral Imo State-born singer be contacted as I announce my intentions to adopt him as my own child and also undertake, personally, to sponsor him from primary school level (his current educational level) to Catholic priesthood (his career choice).
The Governor obviously noticed his talent and called him a “specially talented kid singer” and promised to sponsor Opara through school from primary school to his Catholic Priesthood which is his choice of career when he grows up. Governor Uzodinma further said “Master Opara made waves in the internet at the weekend with videos of his unique rendition of some catholic hymns/songs which marked him out as a specially talented kid singer. This attracted instant applause and commendations from the public. I believe in harnessing skills and talents and grooming them to be of better use to mankind and to this end, I directed that the family, through the Imo State commissioner for information, Hon. Declan Emelumba be informed of my intention to adopt their son as my own child”.
Governor Uzodinma concluded that he hopes and prays that Opara accomplishes his full potentials in God’s appointed time. In the same vein, few days ago the Governor of Kaduna state, Nasir El-Rufai, promised to sponsor the education of a 13 year old almajiri boy from primary till he graduates from the university; the Governor appreciated his effort for choosing to work rather than begging.