At the 11th Annual General Meeting of Transnational Corporation of Nigeria Plc(“Transcorp”), the Board ofDirectors confirmed their confidence in Transcorp’s growth trajectory and affirmed the Company’s commitment to increasing yield and returns to shareholders, while continuing its significant capital investment strategy. Despite the difficult economic climate, revenue grew by 46% in 2017(N59.42bn). 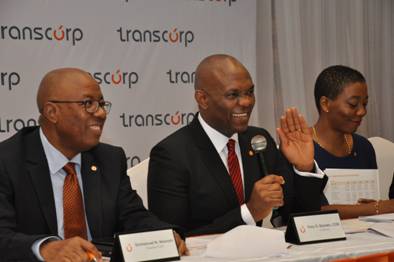 Chairman, Transcorp Plc., Mr. Tony O. Elumelu highlighted the significant progress made by Transcorp group companies, stating that Transcorp was uniquely position to impact the Nigerian economy positively and improve quality of life for all Nigerians.

“Our investments in the key strategic sectors of the Nigerian economy directly align with our philosophy of meaningfully and positively impacting lives and transforming the African continent. We invest for the long term, knowing that at times the headwinds can be strong. We want to be the biggest provider of power to the Nigerian economy; we want to put light in homes, schools and hospitals; we want to provide the power for Nigeria’s industrialisation. When foreign investors come to Nigeria, we want to host them in our Transcorp Hilton hotels; and we want to supply indigenous produced oil and gas to power our networks and roads. Throughout 2016, we have continued to invest in Nigeria, when others waivered,because we are absolutely‎ convinced in Nigeria’s destiny as the next global economic powerhouse.”

Elumelu spent time providing shareholders with a detailed update of the Company’s  achievements and highlighted the recent commissioning of the 115MW Gas Turbine at Ughelli Power Plant, Nigeria’s largest capacity gas generating plant, as evidence of the progress made by the Group in the power sector, despite regulatory and operating challenges.

Shareholders were informed of other important developments at the Company, including the impending increase of available capacity of the Ughelli Power Plant to 850MW by the end of 2017; the $100m renovation of the Transcorp Hilton Abuja, also to be completed in 2017; and the conclusion of exploratory drilling of Transcorp’s oil well , before the end of 2017. According to Elumelu, Transcorp’s future is bright, with the completion of these projects and looks forward to sharing the social equity these investments will create in Nigeria in the form of jobs, community empowerment, and improved quality of life.

Also, speaking at the meeting, the National President of the Association for the Advancement of the Rights of Nigerian Shareholders (AARNS), Dr. Faruk Umar commended the Board for offering an impressive vision for the future for Transcorp, despite the difficult economic conditions, which impacted negatively on the Company in 2016. He went on to state that he was convinced that with the strategy already in place, the shareholders stand with theBoard in its determination to return the Company to profitability. He called on the Federal Government, to act on the structural issues in power sector,which had contributed negatively to the Company’s profitability in 2016.

Responding to the comments from the shareholders, Transcorp’s President/CEO, Mr. Emmanuel Nnorom, said the Board’s mandate was to achieve strong financial results, despite a challenging operating environment. “We will continue to work and live by our values of execution, enterprise and excellence, towards optimal maximisation of the abundant opportunities that exist in our operating sectors,” Mr Nnorom said.

Mr Nnorom reiterated the Chairman’s optimism that‎ 2017 looks bright, promising better results in 2017 and beyond. Nnorom said that the considerable investment made  were already yielding fruit and that the Company had illustrated both prudence and a willingness to invest for the future of all.