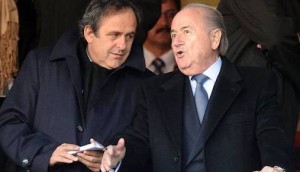 Sepp Blatter and the longtime Fifa president’s one-time heir apparent, Michel Platini, have been banned from football for eight years, ending the career of the former and definitively derailing the vaulting ambitions of the latter.

The Fifa ethics committee, chaired by the German judge Hans-Joachim Eckert, has ruled that both men should be banned despite their protestations that they did nothing wrong when Blatter paid the Uefa president 2m Swiss francs (£1.35m) in 2011, nine years after both men claimed it was originally due.

The committee found that: “Mr Blatter, in his position as president of Fifa, authorised the payment to Mr Platini which had no legal basis in the written agreement signed between both officials on 25 August 1999. Neither in his written statement nor in his personal hearing was Mr Blatter able to demonstrate another legal basis for this payment. His assertion of an oral agreement was determined as not convincing and was rejected by the chamber.”

Fifa was thrown into crisis in May when Swiss police raided the five-star Baur au Lac hotel and nine senior football officials were indicted in the US on charges including money laundering and racketeering. Last month, a further indictment followed against a further 16 individuals.

Under huge pressure, Blatter agreed to stand down in June a few days after being re-elected for a fifth term as president. Platini quickly emerged as the favourite to succeed him, much to the public chagrin of his one-time mentor.

Blatter appeared personally before the ethics committee on Thursday, protesting his innocence in a letter to all 209 Fifa members in which he likened the process to the Spanish inquisition. Platini refused to appear in person, with his lawyers conducting the nine-hour hearing before Eckert and three other judges. But the Frenchman railed against the ethics committee’s provisional 90-day suspension and complained of ulterior political motives to force him out of the race to succeed Blatter.

Neither man has been able to provide a written contract for the payment, however, or definitively explain away why it was eventually paid in 2011, a few weeks before the presidential election at a time when Blatter was facing a challenge from Mohamed bin Hammam, the Qatari who himself was ultimately banned over bribery claims. Blatter and Platini said the payment related to a period between 1998 and 2002 when the Frenchman acted as a special adviser to the Swiss. Platini has claimed Blatter told him at the time that Fifa could not afford to pay him, despite the governing body making £78m over that four-year cycle, and did not want to break its wage structure.

Both Blatter and Platini have said they believed their verbal contract was legal under Swiss law. However, Swiss law places a five-year time limit on such payments. The fact that the payments did not feature in Fifa’s accounts was believed to form part of the case against them.

The ethics committee found that: “The payment to Mr Platini had no legal basis in the written agreement signed between both officials on 25 August 1999. Mr Platini’s assertion of an oral agreement was determined as not convincing and was rejected by the chamber.”

Switzerland’s attorney general is investigating whether the 2m Swiss francs constitutes what is termed a “disloyal payment”.

Blatter has been interviewed as part of a criminal investigation against him and Platini spoken to as “someone between a witness and an accused person” under Swiss law.

The 79-year-old Blatter, who over 18 years as Fifa president and 22 before that as a senior executive had become synonymous with its culture of patronage and perks as football’s commercial income boomed, has cut a disconsolate figure in recent weeks since being provisionally suspended for 90 days.

“This is not justice. I put these people into the office, where they are now in the ethics committee and they don’t even have the courage to listen to the secretary general, Platini or me,” he said in one of many interviews he has given over the period, during which he has variously railed at the US investigators, Uefa and the British media.

Since being levered into position by the late Adidas executive Horst Dassler and João Havelange, his predecessor as president, Blatter survived a series of scandals and corruption storms. But, barring a successful appeal to the court of arbitration for sport, his long career in football is now over.

Platini’s fall from grace has been swifter still. In the wake of Blatter’s demise, the Uefa president was the most powerful man in football and swiftly emerged as the strong favourite to succeed him despite questions over his support for Qatar’s successful 2022 World Cup bid and his formerly close links to Blatter.

But the former world footballer of the year, who expected to attend this summer’s European Championship in France as Fifa president, now faces being cast from the sport that made him at the age of 60.
Culled from Onefootbal

Categorised as : News, Sports
No Comments »