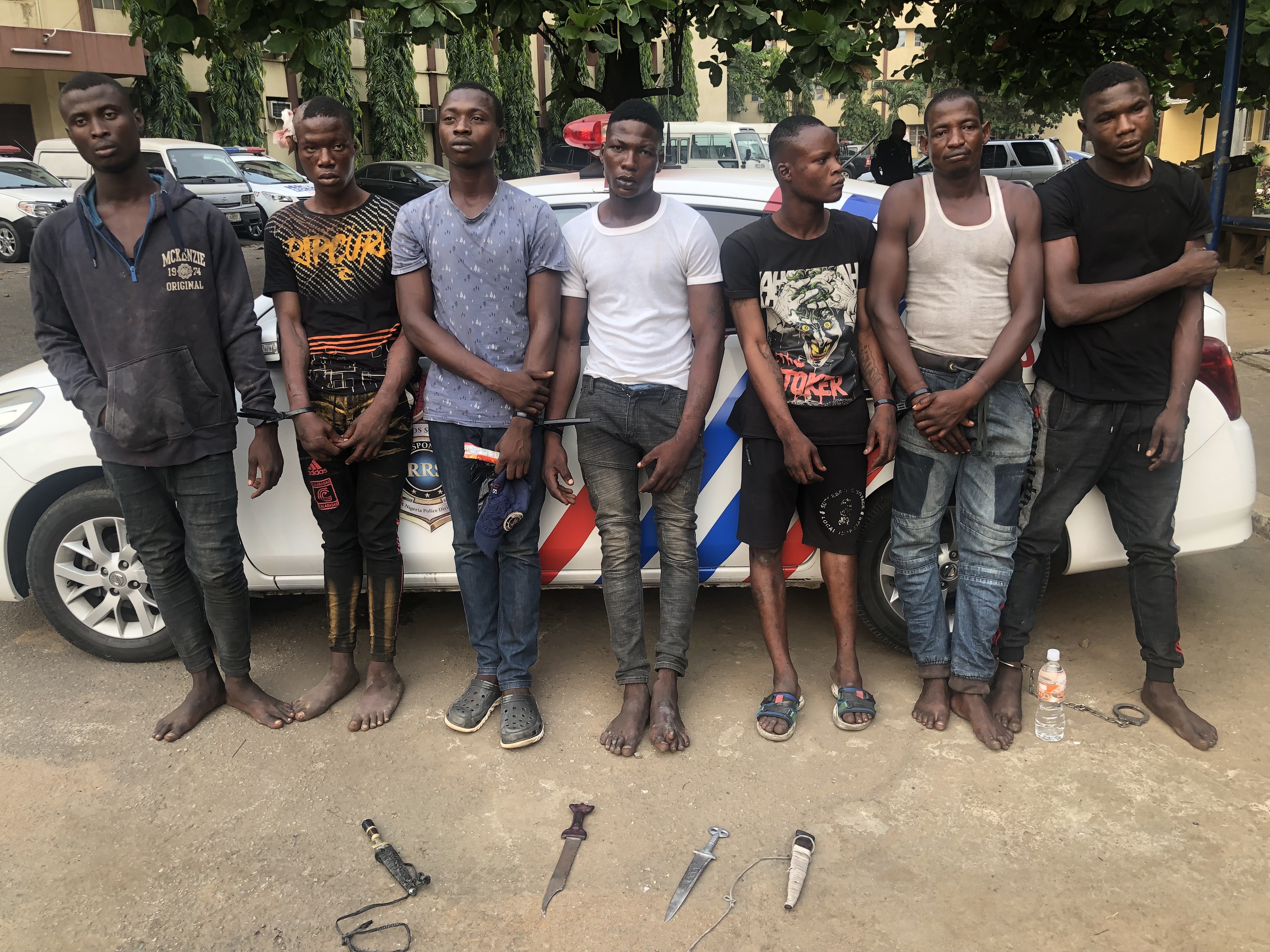 The hands of the law has finally caught up with a group of robbers after the  operative of Rapid Response Squad (RRS), a unit of Lagos State Police Command arrested the  syndicate believed to have been  terrorising College Road, Fagba, and Abbattoir areas of the state.

As for this group of boys, their diversity in terms of language and ethnicity was never a barrier as they were united in forming a gang with the sole interest of robbing Lagosians of their valuables.

The robbers were arrested on Valentine’s day at around 9:00 p.m at College Road, Ifako – Ijaiye area of Lagos, after the gang had robbed more than five passers by of their valuables brandishing knives and other harmful objects.

All the suspects said they came from different parts of the country but reside in Abattoir, Agege, Lagos.

The suspects had on Thursday, robbed one Agafe Augustine after he alighted from a taxi at College Road, Ifako Ijaiye. Amongst the items collected from him by the gang were; an android phone, N14,000 and a handbag.

According to Agafe, “I allowed them to rob me because they were many and were holding dangerous objects but I trailed them to an open place before raising alarm. This drew the attention of some RRS officers on patrol in the area and they arrested some of them”.

He added “ they equally robbed some other victims amongst whom were a lady in company of her boyfriend. They dispossessed them of their phones and  stabbed her boyfriend who refused to let go of his mobile phone after parting with his wallet”.

In his confessional statement to the crime , one of the suspects said they specialise in robbing passersby  at  night collecting their mobile phones, bags, jewelry and wallets.

Investigation by the police revealed that one of the suspects, Timileyin Oladipupo popularly known as ‘Timi Yahoo’, specialised  in working on SIM cards of the stolen phones to determine which ones are internet banking enabled  to facilitate the gang access to transfering money from victims’ accounts.

The suspect disclosed “I have worked on so many SIM cards given to me by Lekan and other groups in Agege Abbatior and what I do is to further increase our gain from the robbery by transfering victim’s money from their bank accounts after using some softwares to determine how much are lodged inside their accounts and we also share the proceeds”.

The Lagos State Commissioner of Police  Mu’azu Zubairu  who ordered the arrest of all the gang members, added that they be transferred to SARS for a thorough investigation.

He noted that the gang be charged to court as soon as investigations are completed.