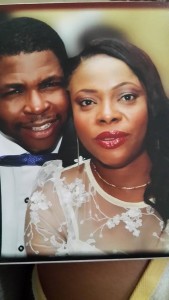 Like father like son, the popular adage says, but this time around, some children are not ready and willing to behave like their fathers. One of such is ‘Tosho Oshoffa, son of the highly revered and spiritually gifted founder and head pastor of the Celestial Church of Christ (CCC). The Imeko indigene is seriously enmeshed in serial marriage which is not expected of a son of Oshoffa’s status.
In a report available to us here at Global News, it was gathered that Tosho has over the years got married to four different women, a practice that is synonymous with the Islamic religion. His first wife is one Demilade. In 2012 he married another making his first wife to raise a lot of dusts and objectively rejected the illegal marriage. The lady is Lizzy who is said to be of Delta extraction from the south-south part of NIgeria while his fourth wife is Bola Shoaga. Their wedding was a high class one attended by the crème-de-la-crème of the Celestial Church,the engagement was done on May 19th and August 7th 2014 respectively.He is now said to have married another lady named Carol, and they are currently hibernating together in France and this is what is causing commotion in the life our dear woman wrapper, ‘Tosho.
We gathered that trouble started for the wedding when ‘Tosho allegedly abandoned Bola in their Magodo Isheri home which did not go down well with her, not knowing that a bigger problem was coming her way. For reasons best known to him, ‘Tosho recently ordered that Bola should be thrown out of the house.
This we learnt infuriated her in no small way and from then the battle line was drawn between one-time lovebirds. To show her seriousness she has taken the war on to the social media posting her pictures with the lover man, especially the pictures of both the traditional wedding and court marriage that was done at Ikoyi registry while telling anybody that cares to listen that she is still authentic Mrs. Oshoffa.
In one of the tweet messages we got, Bola said, “YOU DEVIL YES YOU COME AGAIN TAKE MY PICTURE SEND IT EVERYWHERE,” apparently directed at her husband for maltreating her. The estranged wife went further to post different pictures of new lovebirds online without trepidation. The question on the lips of many close observers of the family issue is, why is ‘Pastor’ Tosho so restless and why has he gone as far as marrying four wives knowing fully that the Christianity does not permit a man to get married to even two women at a time?
However, Global News gathered from one of Bola’s friends that there was no time her property were thrown out of the house. She boasted that they can’t try it with her. She further claimed that all what Tosho wanted to do was to come to the house to pack his belongings without Bola’s knowledge when she might have gone to the office, perhaps thinking that Bola would behave like Lizzy who packed everything away from the house when he abandoned her and ran away to Paris.
She further stated that Tosho was in the habit of treating women badly, that the other lady, Lizzy, nearly died with her pregnancy during this period because of the way he treated her. Learnt that he just told the lady he was going to Paris to marry another woman and gave her N500,000 to sort her life out. The pressure was so much on her that she developed high blood pressure; and this is the same thing she’s doing to Bola, but because she is well to do and is working, she has been able to weather the storm.
Global News investigation further revealed that he must have married Bola to use her to advance his political ambition or to get an appointment using her connections in the government circle as we learnt that it took a while before she agreed to his love proposal and within this period he lied that he had divorced his wife in Paris.
We also learnt that Bola tried her best to manage him and make the union work but because of his treacherous way of life all her efforts packed up like a badly arranged cards.
The associate further disclosed that if not that Bola is pregnant she would have known what to do but all she wants now is for the serial liar to come back home so they can sit down and iron out their differences.