Osun: Excavating the ruins of the Oranminran years….By Festus Adedayo 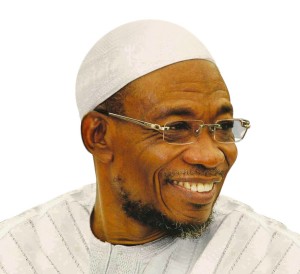 Let me declare ab initio that I am an interested party in Osun educational matter although Ondo State is my home. All my schooling was done in the then old Oyo State which included today’s Osun. From St. John’s Primary School, Ikire, to Ajangbala DC Primary School, Iwo, down to Akinorun Grammar School, Ikirun and ending up at Cherubim & Seraphim High School, Ilesa, I lived my dawn learning at the feet of teachers of teachers. But all these schools of mine were victims of Aregbesola’s excitable and apparently less-than-logical policies. The queer and uncanny educational policies gave the impression that the driver behind their wheels probably experimented with the excitable mindsets of destroyers of history and of great empires and castles.

Of a truth, Aregbesola was queer as governor. Many people have given his awkward thinking process diverse negative interpretations. They even said he laughs when others are sober. This mysterious method of thinking percolated virtually every policy his government touched for eight years. Take for instance his re-designation of the school system in Osun State from the nationally sanctioned 6-3-3-4 model applicable in all states of the federation, to a strange 4-5-3-4. If his desire to be against-method, in the mould of the philosophy of science of Paul Feyerabend, cohered with human reasoning, he probably would have been celebrated as an uncanny but revolutionary thinker. The policies however ended up ghastly, gulping billions of Naira of a state that was barely surviving. These policies made the profound submissions of some analysts which gained currency a couple of years ago a life of truth. The analysts had reasoned that, with the challenge of ‘balance’ very apparent in the decisions taken by our leaders in government, we may need to subject them to some level of tests to ascertain their mental compliance with what obtains on the streets.

The Aregbesola 4-5-3-4 model meant that pupils in primary schools ended their elementary class journey in Primary 4. They then proceeded to what is called Middle School – a ghastly mixture of upper primary and junior secondary schools.  Established schools of several decades of existence and with renowned pedigrees, suddenly transformed into what he labelled Middle Schools and were so renamed. My alma matter, C & S High School, along Iyemogun Road in Ilesa, suddenly became a Middle School and could only accommodate students from JSS 1 to 3, plus primary 5 and 6 pupils. What that also meant was that graduates of Osun primary schools didn’t have Primary Six school leaving certificate – because there were no primary schools again. To worsen it, when these young kids left Primary 4, they ended up in these middle schools that are most times in far-flung geographies, outside their jurisdictions.

Perhaps the most recondite to penetrate in the thinking process of the Aregbesola educational model was his decision to ‘restructure’/merge the public schools in Osun. In 2013, he decided to violate ancient educational groves by re-naming and ‘reclassifying’ schools and the implications were very grave. For example, Baptist Girls High School, Osogbo, under this queer policy, immediately turned into a mixed school. WAEC, which embosses names of schools on certificates, was not informed of this and so, an awkward situation arose where a boy carried the certificate of a girls’ school. This is with the implication that, in a Nigeria where fakery is second name, any holder of such certificate is viewed as a forger ab initio. How could such child explain that he was a victim of a challenged governor who, in the process of his excitement, lumped the sexes together under a single sex name?

Other examples of this atypical mental output abound. St Charles Grammar School in Osogbo used to be a boys’ only school. In the weird thinking of the governor, he lumped boys and girls into St. Charles.  For Ilesa Grammar School, he decided to demolish iconic structures there and give it a new name. Many ex-students of the school appealed to him for a change of mind. Former governor of Lagos State, Lateef Jakande, was reported to have written to Aregbesola, pleading with him not to walk this tendentious route on his alma mater. Not only did he ignore Jakande, he changed the school’s name to Ilesa High School and destroyed history.

This was also the fate of Osogbo Grammar School. Those days when I was at Akinorun, Oso Gramms had a renown that made us quiver. It was the first secondary school in the whole of the Osun Division which included Ogbomoso in current Oyo State. Aregbesola’s roving spirit couldn’t be tethered by the renown of Oso Gramms and its enviable history. He changed it to Osogbo High School and balkanized the school’s land, building what he called a mega school on same land, fenced the structure he built therein and named it Government High School, Osogbo. This was right on the school’s sports centre’s land, the same thing he did with Ilesa Grammar School.

Perhaps in the single uniform policy of his for all schools in the state could his unusual thinking be properly apprehended. Aregbesola centralized the uniform system and in 2013 when he began it, he promised he would give each pupil a pair of uniforms, free of charge. He did and distributed free uniforms to all of them but the clothes were so inferior that they lasted barely for more than one term. Thereafter, he asked the pupils to buy the uniforms, which they purchased from a sole supplier he brought from Lagos for N1,800 per child. This was a rip-off. Students used to buy uniforms for between N800 and N1000. But their unusual governor foisted a monopoly on the distribution of the clothes and authorized the agent from Lagos, said to be his neighbor, to sell the clothes to every pupil in all the 30 local governments of the state. Aregbesola, who prided himself as Oranminyan but which citizens later inflected to Oranmiran (another calamity) did not think this was an assault on decency and public morality. A garment factory he set up and called Omoluabi Garment Factory held the franchise for sewing and selling the school uniforms.  What that translated into was that the jobs and means of subsistence of local tailors and cloth sellers were, for that period of time, abridged and given to some privileged people from Lagos. Those who attempted to sell the cloths were caught and remanded in Ilesa prisons by his government. It was a real Koseleri (unprecedented) government.

But those of us whose schools suffered mere name-change were lucky. There was a great school called Fakunle Comprehensive High School, Osogbo. Aregbesola, against protests and pleadings, demolished that school and planted a dubious shopping mall there.

For a government which advertised its abiding interest in education, you would think that the superstructure of a good education, which demanded that teachers were well taken care of, would be its testament. Not for Aregbesola. He crowned these abstruse-minded policies with a cruel regime of owing teachers’ salaries, as he did civil servants’ in the state. He invented and patented the skewed governmental system of halving workers’ salary.  When he left government in 2018, he was said to be owing 34 months of half salary and later premised this on a claim that he had agreed with the workers to pay only from whatever was the accruals to his government. Pensioners also groaned under this queer model with many of them dying in the process.

Aregbesola built some model schools which he called Mega Schools. Gargantuan structures they were of a truth, but the mental process behind building model schools, especially in places where they were not needed, became a huge issue of discussion. Built with billions of naira loan taken from Islamic bond called Sukuk, each for a minimum of N1.2billion, Osun is today gasping from the suffocation of repayment of these and other loans used in funding peremptory-minded white elephant projects.

The Osun State University’s case is even pathetic. From when he took over the reins of government in November, 2010 till he left in 2018, Aregbesola barely gave a single kobo to this school, either as subvention or for recurrent expenditure or even capital grant. It survived entirely on self-help. When the LAUTECH crisis resurfaced towards the end of his tenure, he held high the wicked system he used in Uniosun, claiming that the model should also apply and LAUTECH too should learn how to live from hand to mouth.

Thank God, Oyetola has given us back our schools – and he is paying teachers and pensioners without going to CNN to announce it. He deserves the accolades he has received for being pro-people and a real Omoluabi. Now, Alhaji Jakande and several millions of alumni Osun schools can hold a thank-God party to celebrate their victory over arrogant arbitrariness.

I am however surprised that the Oyetola government said it would retain the Opon Imo system of the Aregbesola years. It is funny that the government won’t discontinue this system that everyone knew was a tablet of sleaze. The question to ask is whether anyone in Osun had ever seen a tablet of Opon Imo since the scam was brought about? If Osun had a House of Assembly, the right path of honour in redeeming this serially pauperized and brutalized state in the hands of Aregbesola is to call for a public enquiry on the whereabouts of the public money which transformed into the heist called Opon Imo (people call it Opon eemo – bizarre tablet). Its other name is an open slap on the face of everybody he gathered to Ilesa when it was launched at the Zainabab Hotel, Ilesa, a programme featured live for three hours by Channels television. I was there. There should be a public probe or a truth commission, at least to ensure that the ruins of the Aregbesola years are properly interred.

To all students of power, this is another cardboard-constructed power base by a man who built a mansion on quicksand which just collapsed and kissed the canvass. Generations to come would however remember that a negatively uncanny governor, whose real composition and excitement cannot be deciphered, was once a tenant at Bola Ige House, Osogbo.