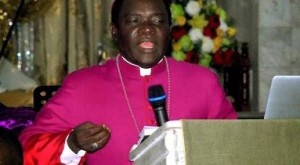 Kukah said this in his keynote address at a conference organised by the Islamic Welfare Foundation at the Fountain University, Osogbo.

At the event titled, ‘The Muslim agenda for Nigeria: Challenges of development and good governance’, the cleric said the fresh agitation for an Islamic state by Boko Haram could be traced to the promise made by northern leaders to ensure the total implementation of Sharia law.

He said, “A hypocritical elite continues to believe that it can claim the benefits of democracy but use it only to consolidate its hold on power. This is what has laid the foundation for what is now Boko Haram.

“We must locate the current crisis of Boko Haram within the context of the inability of the northern Muslim elite to live by their own dubious creed of being Muslims. They preached Sharia Law but only for the poor. They preach a religion that encourages education, yet their own people are held in the bondage of ignorance.

“They came to power on the basis of a democratic society but they turned around and declared Sharia to generate a false consciousness among the poor that they want a theocracy.

“They did not wish to live by the same standards, so they decided to live their own Islam in the capitals of the world away from the prying eyes of their own people. Boko Haram began as a revolt against this mendacity, subterfuge and hypocrisy.”

Kukah said northern leaders failed to explain to the poor masses that Sharia law and democracy could not co-exist.

The cleric stated that the normal argument that Boko Haram was not a Muslim group was nonsensical because Boko Haram’s aim was the total implementation of Sharia law, which Muslim leaders had promised them in the past.

Kukah added, “Now, I hear Muslims in northern Nigeria hiding under the cover of the facts by saying: ‘These Boko Haram people are not Muslims. They do not represent us’. Well, first, they are your own children. You must take responsibility for what has made them what they are today and to the rest of society.

“They claim they have been inspired by the Quran and no other holy book. They say they want to build an Islamic state. So, they are Muslims. After all, from the debates of the Constituent Assemblies of 1979, 1988, and 1995 and beyond, did their fathers and grandfathers not stage walkouts, demanding Sharia Law? Was it not to tame them that President Ibrahim Babangida declared what he called ‘no-go areas’ in the debates about our constitution?”

The cleric noted that the kidnapping of the Chibok girls and the use of girls as sex slaves in the North were in line with the ideology that a girl, who is still an adolescent, could be married off to an older man.

He said, “The promise to institute Sharia has become the most potent tool for political mobilisation and organisation. Till date, the tactics may have changed, but the essence has not. Rather than face the tough questions of how and why over 15 million children in the northern states are on the streets; how and why the northern states are falling behind on almost every index of development, the northern Muslim elite continues to live for just the moment, with no plans for tomorrow.

“Should we pretend that a society that allows the forced marriages of its young daughters could frown on the idea of a group kidnapping and forcing young girls into sexual slavery? Islam must have an honest look at the mirror and have an internal discussion.”

The Catholic bishop urged northern leaders to stop pretending as if they did not know the root cause of Boko Haram.

He said they should ask themselves why Boko Haram was headquartered in the North and not in other zones of the country.

Kukah added, “Although we all seem to pretend that Boko Haram has caught us unawares, the worst thing is that we continue to hide our heads in the sands of self-deception by further denying the roots of this ugly side of our humanity.

“That Boko Haram, its disciples and victims are localised to northern Nigeria, should be instructive. What this calls for is an honest review of the root causes. We need to ask what it is about the past or the present that has led us to this ugly and deadly path.

“It is my considered view that northern Islam has to confront the realities of taking its religion into the modern world of democracy seriously. Muslims in northern Nigeria cannot accept democracy and reject the inclusive nature of its philosophy as it is the case today.”
Culled from Punch