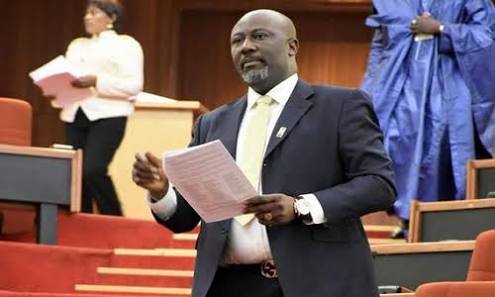 Dino Melaye, the senator representing Kogi west at the national assembly, has accused Okechukwu Enelamah, minister of industry, trade and investment, of colluding with ‎MTN to illegally move $13.92billion out of Nigeria.

Melaye alleged that the money was moved out of the country between 2006 and 2016.

In a motion on the floor of the senate on Tuesday, the legislator also‎ reeled off the names of other Nigerians whom he alleged were complicit in the act.

“The senate notes with serious concern the repatriation of $13.92bn illegally out of Nigeria by Mobile Telecommunication Limited (MTN) through its‎ bankers between 2006 and 2016,” he said.

“Concerned that since inception, MTN had sought the collaboration of influential and unpatriotic Nigerians to assist them in looting our external reserves.

“Pained that these Nigerians, including a serving minister who MTN used in moving $13.92bn out of Nigeria, which is over 50 percent of our external reserves floated and incorporated offshore SPVs in Cayman Island, Mauritius and British Virgin Island.

“The minister of industry, trade and investment, Dr Okechukwu Enelamah, owner of CELTELCOM Investment Limited with address at No 608, St James, Denis Street Port-Lewis Mauritius purportedly claimed to invest in MTN on February 7, 2008, got certificate of capital importation and filled form A on the same date, closed his investment in Nigeria after receiving dollar payment‎ for repatriation to New York same day.”

Afterwards, Melaye‎ urged the senate to mandate its committee on banking, insurance and other financial institutions to carry out holistic investigation into the matter.

After listening to the motion, the senate directed its committee on banking, insurance and other financial institutions to investigate the allegation.
Culled from the cable