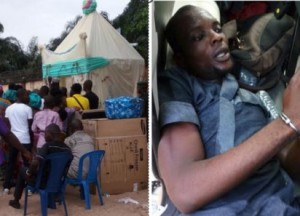 Leader of the dreaded gang of bank robbers which had been terrorising commercial banks in Lagos and Ogun states in military uniforms has disclosed that his gang never intended to kill nine officials of the Department of State Service, DSS, who went missing last September.

The suspect, identified as Kelly Fotor, an Ijaw native of Arugbo, Ondo State, was arrested last Saturday by operatives of the Inspector General of Police Special Intelligence Response Team, SIRT, at a wedding ceremony in Sapele, Delta State.

Gun battle with Police and arrest

Vanguard gathered that the suspect, who was at the ceremony with some armed men, had a gun duel with the operatives which led to the killing of one of the policemen, while Fotor and three of his colleagues, were arrested with bullet wounds.

It was gathered that the SIRT operatives, led by CSP, Abba Kyari, who had been on the trail of the gang, trailed Fotor to the wedding ceremony after their last operation at Agbara area of Ogun State where they robbed a bank and left three persons, including a pregnant woman, dead.agabara

Fotor, who sustained a bullet wound during the shootout, told Vanguard while he was being transported for treatment that he was the leader of the South South group of the gang.

He explained that the gang also had a Lagos leader who he identified as Ossy, adding that his gang was made up of 12 men, including himself, with bases in Delta, Rivers, Bayelsa and Ondo states.

Fotor also said his gang normally teamed up with their Lagos group for operations, disclosing to Vanguard that he and his gang were formerly into sea piracy before teaming up with Ossy.

According to him, Ossy is the leader of the pipeline vandals at Arepo and Ikorodu areas.

Fotor also said he and his men took part in the Lekki, Ikorodu, Festac and Agbra bank robberies, adding that they made N28 million from Agbara bank robbery.

‘’It was Ossy’s men who usually pick out our targets. They were the ones who picked out all the targets, my job was to give support and my boat is very big and my boat boy is a professional and knows his way around the water very well,” he stated

He, however, said it was one of Ossy’s boys who normally dressed like a woman during operations.

How the DSS operatives were killed

On how they killed the nine DSS officials, Fotor told Vanguard that as commanders of the groups, he and Ossy never intended to kill the operatives when they were captured.

He explained that the operatives stormed their hideout wanting to rescue a woman who they abducted from Festac.

He explained further: “ One of our boys who was heavily drunk met us while we were interrogating the suspects after we captured them and he opened fire on them.

‘’I was at their camp at Ikorodu when the DSS operatives were captured and they brought them before me and Ossy and they knelt down and we interrogated them, but that guy, he was Ossy’s man. He was very drunk, walked in and without asking questions opened fire on all of them and killed them. Neither myself nor Ossy ordered their killing, we never wanted to kill them,” he explained.

Meanwhile, Vanguard gathered that Fotor and three other suspects arrested along with him have been transferred to Abuja, while SIRT operatives are still combing the area for other members of the gang.