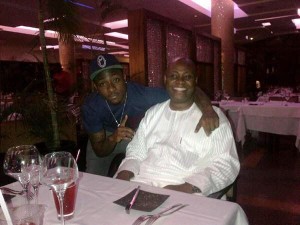 Things are not really going on well in the home front of the Adelekes. Remember, a member of their family, Senator Isiaka Adeleke is a top politician in Nigeria and indeed the first executive governor of the state. He is also a leader of the All Progressives Congress (APC). Davido, is one of Nigeria’s raves of the moment when it comes to music and entertainment. He has been there and seen it all. But now, the sister, popularly called Coco is not having it rosy with her matrimony.
Global News gathered from sources that some of her past dates are seeking for revenge as she is believed to have dumped them when they least expected she could act so. The ex-boyfriends said that, even though they decided not to act on her wedding date, they eagerly waited till now to put their plans to action. We gathered from reliable sources that the guys are not leaving any stone unturned to ensure that they revenge against Coco because she had inflicted so much pain in their hearts. This and many more are the reasons they are working secretly to ensure the marriage crash.
It is also gathered that Davido’s elder brother is also involved in some illicit things. The young man is reported to be a drug addict and one with questionable characters. However, we at Global News are linking the attitudes of these silver-spoon kids with their father who happens to be the elder brother of Senator Isiaka Adeleke. The father of Davido and his other siblings were renowned to be running a bank called Pinnacle. This bank was involved in many financial crises before its final breakdown.