DANGOTE/ BUA UNHEALTHY RIVALRY: HOW DANGOTE IS PLAYING WITH LIVES OF NIGERIANS OVER COVID-19 VACCINES 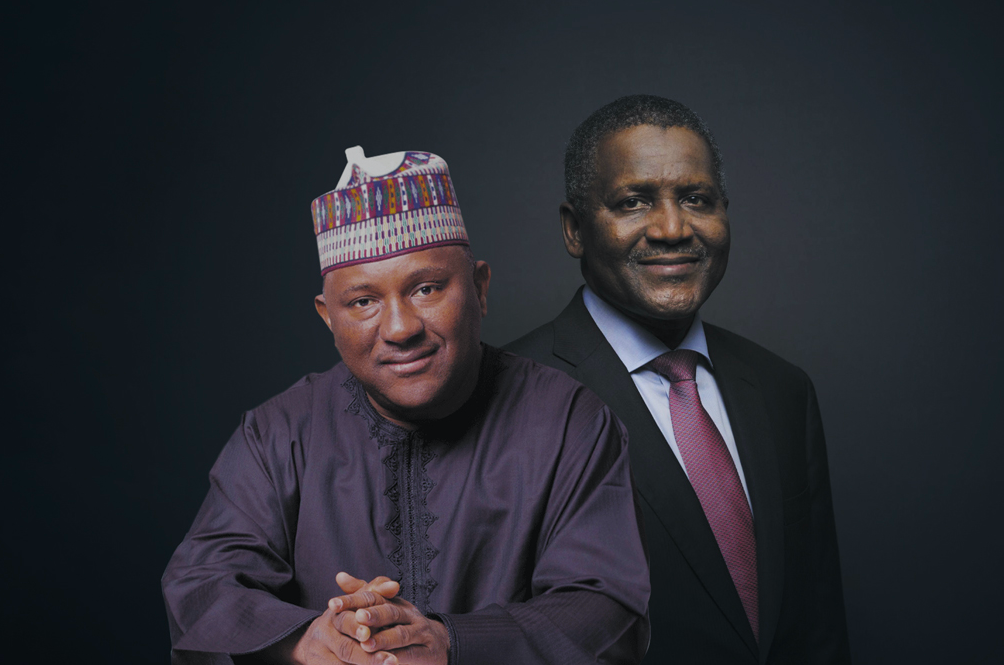 It is an established fact that there has been a long bitter rivalry between Nigeria’s two business moguls, Alhaji Aliko Dangote and his BUA Group counterpart, Alhaji Abdulsamad.

But the new twist to their rivalry is unhealthy, as the Dangote Group boss is obviously toying with the lives of innocent Nigerians in the name of bitter politics.

As the drama surrounding acquisition of a million doses of AstraZeneca vaccine continues, BUA Group has described the Coalition Against COVID-19, CACOVID, as “petty” for disowning its (BUA) earlier claims on the purchase.

CACOVID had issued a rebuttal on BUA’s earlier claim on the purchase of vaccines for Nigerians, saying that no individual has the capacity to strike such deal. In a swift reaction, the BUA group has released details of what transpired at the CACOVID steering committee where the CBN governor, Godwin Emefiele announced that CACOVID had been given the opportunity through the Afrexim Platform to access and pay for 1million doses, provided payment was made today or tomorrow – failure which the opportunity to get those doses next week may be lost.

According to BUA, after extensive deliberations, there was no agreement reached and despite members being offered the opportunity to donate funds towards procuring the doses, none offered.

“The Chairman of BUA also requested through the CBN governor that the Naira equivalent be paid to the relevant account with CBN, and that CBN forward the dollar payment to Afrexim on CACOVID’s behalf.

BUA affirmed that the payment was made immediately after the meeting and transferred the money to the CBN in order to meet the deadline.

BUA noted with dismay that the actions of the CACOVID team only meant that “some members of CACOVID were not happy that BUA took this initiative in the interest of Nigeria and to ensure that the deadline was met to receive the 1 million doses of the vaccine next week.

“BUA did this gesture in good faith as it has done with its interventions throughout the pandemic,” it said.

It alarmed that “We will however like to state clearly that we are aware that a prominent member of CACOVID is not happy that BUA took the initiative to pay for the vaccines – fulfilling our pledge just as we said during the meeting.
“Now, they want to scuttle it by this action because they were unable to take the initiative.
“We find this release by CACOVID to be very petty and unbecoming of seemingly serious corporate citizens because it is tantamount to playing politics with the lives of Nigerians.
“This is no time for politics. It is time for us to come together to help Nigerians and it does not matter who is helping or paying.
“We stand ready to keep supporting and despite this petty action, we have decided to let the money remain in the CACOVID Account with the CBN pending when they are ready to utilize the funds for Nigerians to access the vaccines,” the statement reads.

Meanwhile, investigations revealed that “the prominent” member of CACOVID “who is not happy” with BUA’s gesture is Dangote, and he has been making frantic efforts to thwart BUA’s efforts.

Those who are in the know said that Dangote is the prominent member of the CACOVID team that will do anything to thwart the efforts of BUA not to take the shine off him.

Some members of CACOVID like Access Bank MD, Albert Wigwe and Godwin Emefiele are also on the side of Dangote as loyalists.

The clash in business interests between Dangote and Rabiu has its roots in traditions pre-dating both men’s business careers. Alhaji Aliko Dangote comes from a celebrated lineage of wealthy merchants from the northern commercial capital of Kano.

His famed maternal great and grand relatives made fortunes importing and exporting edible commodities. Upon completing his studies at Egypt’s Al-Azhar University, the young Dangote in 1977 naturally picked up trading commodities in which he had amassed generational knowledge and a network by proxy.

Abdulsamad Rabiu also has a heritage in commodities trading. His late father, Isyaku Rabiu, was a renowned merchant and industrialist in Kano State in the 1970s and 80s.

But a 1983 military coup under Major-General Muhammadu Buhari overturned the fortunes of the senior Rabiu for his failure to pay for rice imports. In 1988, eleven years after Dangote struck out in business, the young Rabiu made up his mind to change his family fortunes and founded BUA International.

Over 30 years later, the Dangote Group stands out as a leading pan-African brand with interests in commodities, energy and logistics. Its companies have over 30,000 employees and his group represents nearly a quarter of the Nigerian Stock Exchange’s N28 trillion ($75bn) value. Its crown jewel, Dangote Cement, single-handedly boasts a market cap of $14bn and controls 60% of the market.

The ‘challenger’, BUA Group, has interests in cement production, sugar refining, real estate, logistics and port operation. Its largest operation and only publicly listed company, BUA Cement, which came to market earlier this year, has a $3bn market capitalisation and 17.6% market share.

Though BUA subsidiaries have often trailed Dangote’s, the Rabiu-led group’s market recognition has come by deploying strategy and doggedness to break through tough market entry barriers and assume leadership positions.

Leveraging its dominance in the market, the Dangote Group has always responded by weaponising pricing to put its competitors out of business.

For example, when BUA Cement started production and reduced prices by about $20/tonne to attract customers, one of the Dangote strategies was to temporarily beat down their prices. Rabiu was unperturbed and instead, focused on meeting the demands of underserved markets in the Northern region, which eventually earned BUA the title ‘King of the North’.

Their rivalry really intensified under the administration of ex-president Olusegun Obasanjo. Many (falsely) attribute Dangote’s success to favouritism by Obasanjo. It’s true that Dangote benefited from favourable government policy towards certain goods to encourage import substitution, but he was already powerful and his success can be attributed to excellent execution.

Still, accusations are directed towards what is claimed as favouritism towards him – to the detriment of his major rivals – regarding preferential access to foreign exchange and preferential tax arrangements. Between 2010 and 2015, Dangote Cement paid N12bn in taxes, an effective tax rate of just 1%, it is alleged by some.

The BUA chief allegedly wrote a petition to the current President Muhammadu Buhari, detailing how policies of successive governments over the last two decades have “unduly” favoured his kinsman.

But it now seems the gloves are off as the rivalry heats up and the battle for cement supremacy intensifies.

Both companies are currently locked in a bitter dispute over mining rights in Obu-Okpella in Edo State. BUA has its highest-producing cement plant in the area and has accused Dangote of blocking access to the mines – which are a rich source of essential material in the manufacture of cement.

Dangote, on the other hand, claims ownership of the mines. The complicated case was still before the courts at the time of going to press.

Apart from the generational business interests of both men, favourable government policies have often determined the direction and expansion of their businesses. A backward integration policy introduced under the Obasanjo Administration to reduce over dependence on imports created opportunities for each of them to establish operations in key industries – cement, sugar and flour.

Dangote Sugar has a 70% market share. The subsidiary possesses an 800,000 tonnes annual production capacity plant which is the largest sugar refinery in Africa and the third-largest in the world. It is the main supplier to the country’s soft drinks companies, breweries, and confectioners.

But BUA puts up an impressive fight. It broke Dangote’s total grip on the market in 2008 by establishing a plant with an annual capacity of 720,000 tonnes. The facility remains the second-largest in West Africa after the Dangote Sugar Refinery.

Cement has helped place the two northern business moguls among Africa’s wealthiest. Forbes estimates the net worth of Rabiu and Dangote at $3.2bn and $8.3bn respectively as of July 2020. Despite Nigeria being the continent’s largest cement exporter, Rabiu says output is still not enough to satisfy local demand given its huge population.

As at 2018, the country had an annual production of 35m MT but needs to produce up to 50m MT of cement for its 200m population.

Both BUA and Dangote have exited the flour market, where Flour Mills of Nigeria wields a 55% market share, to concentrate on cement, which delivers higher returns.

In 2016, BUA Flour was bought by Olam for $275m. Three years later, Dangote sold its loss-making mill to Olam for $361m. Now they have their eyes on much higher returns in the costly game of petroleum refining.

Interestingly, outside of business, the two men appear to be friends. Rabiu was invited to Dangote’s daughter’s wedding in 2018. “I don’t think there’s any animosity between the two industrialists though,” says Feyi Fawehinmi, a UK-based economic commentator.

Both men are in their sixties and have hinted that their supposed rivalry is nothing personal. Earlier in the year, Aliko Dangote visited Abdulsamad Rabiu at his BUA headquarters, on Victoria Island, Lagos.

Wearing a light grey indigenous babariga outfit, instead of his signature two-piece suit, he looked in the mood for casual chat. Both men laughed and smiled for the camera in what was their longest public appearance since Dangote’s birthday, three years earlier.

“It was an honour for me to receive my friend and brother, Alhaji, in my office today. I share his vision and aspirations in transforming and industrialisng our beloved country, Nigeria,” Rabiu shared on social media.

For any outsider, greater competition can only be beneficial. Dangote and Rabiu’s combined 850,000 bpd oil refinery ambitions offer Nigeria’s economy much to hope for. The Department of Petroleum Resources has said that the country expects to become a net exporter of fuel and other petroleum products within the next two years. Consequently, this would increase foreign reserves and help strengthen the frequently weakened naira.