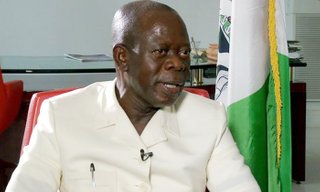 The FCT high court has given an order restraining Comrade Adams Oshomole from parading himself as the National Chairman of the ruling, All Progressives Congress, APC.

By this ruling, the former Labor Leader and Governor of Edo State seizes to be the chairman, pending the outcome of various legal battles.

In his ruling Hon. Justice Senchi Z. Danlami gave an order of interlocutory injunction restraining Comrade Adams Oshiomhole from parading himself as the National Chairman of the APC, pending the hearing and determination of the substance suite.

Comrade Adams Oshomole has been in the eye of the storm lately, as he was recently suspended by his party at his Ward, Local Government and State levels. It was on this premise the injunction application was grounded. Allegations that triggered his suspension include; alleged Highhandedness, Misappropriation of funds and Disregard for the rule of law.

t was alleged that Comrade Adams, single handedly appointed a National Secretary for the party without any constitutional backing. This did not go down well with many members of the NWC and has caused a visible crack in the NWC.

Allegations of misappropriation of fund are also strong, as party members are asking for details on how the over N15,000,000,000, Fifteen Billion Naira, raised during the 2019 elections were expended.

These allegations have fueled Pro and Anti Oshiomhole rallies around the country. The last rally in Abuja was reported to have turned out violent as Pro and Anti Oshiomhole supporters collided in front of the party’s National Secretariat in Abuja. An action that was out of control till the security agencies came in to restore peace.

As events unfold, a lot will get clearer, but as it stands, Comrade Adams Oshiomhole legally seizes to be the National Chairman of the APC.