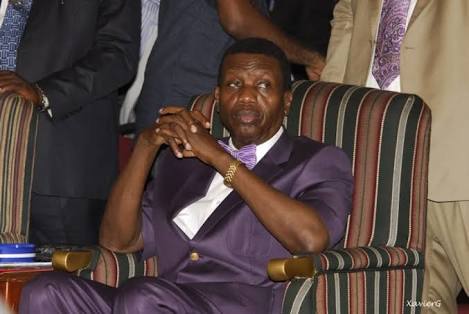 Recently the public space was agog that the regime of former President Goodluck Jonathan granted waiver to some privileged Nigerians to the tune N215b.

The waiver beneficiaries included operators and individuals in the gas sector, agriculture, health, mines and steel and “other sectors”.

One of the privileged Nigerians that got this waiver which was said to have been granted during visits to the former president at nights by these well meaning Nigerians is no other person than the respected man of God Pastor Enoch Adejare Adeboye who is the General Overseer of Redeemed Christian Church of God.

Gathered that Adeboye got waiver to the tune of N6b out of the N215b waivers granted by the Jonathan administration .Though it can’t be ascertained why Adeboye got this waiver but those who are in the know claimed that it may be connected with the series of projects embarked upon by the church especially the new auditorium.

This is not the first time that Adeboye and his church will be embroiled in this waiver scandal, it was the same when Adeboye was granted a whooping N20 Billion between 2006 and 2007 under former President Obasanjo. Though nobody can confirm what Adeboye got the waiver and that maybe it was used for the purposed it was released for because it was alleged that Adeboye and his church didn’t utilized the waiver got in 2006 and 2007 in a right way.

In 2006 and 2007, the duty waiver granted Adeboye was said to have been used “dishonestly” by the church to import luxury Sport Utility Van, SUV (usually called Jeep in Nigeria), building materials and Digital Recording equipment some of which were said to belong to top members of the church both within Nigeria and abroad. In other words, the source surmised that Adeboyeused his high level connections to “aid and abate” his church members to defraud the nation by not paying the requisite importation fees.

The source said that many of the RCCG’s faithful in Nigeria and abroad had celebrated the “unlawful act” as a “testimony to the goodness of the lord.” It was said that a Pastor Ghandi of the Jesus House, RCCG in Washington DC where the late first lady Mrs. Stella Obasanjo used to worship whenever she was in the United State, was a facilitator of the deal.

Many of the luxury cars that were said to have been imported through the deal were not meant for private use. They were said to have been sold at several car dealerships across the country. The source explained that even if the items were not traded, it was unheard of that “people would import duty-free luxury items into any country.”

The official did not rule out the possibility of a thorough investigation of the deal which he said could make Adeboye to pay and possibly face charges.

It would be recalled that the comptroller General of Nigerian Customs Services, Mr. Jacob Gyang Buba had been investigated by the independent Corrupt Practices Commission, ICPC in connection with an annual loss of N50 Billion in respect of the importation tariff waiver introduced by the Government of President Olusegun Obasanjo.

The spiritual depth of some practices of the RCCG has been subject of concern amongst growing conservative Christian worshippers. Adeboye is often criticized for being interested in quantity and not quality. He is said to have broken his church to model parishes were prosperity theology is often preached. The other class of followership is usually called Redeemed Classical. They are more mortified and often completely scriptural. Apart from Adeboye’s too cozy with the high and mighty elite, he was said to have given tacit blessing to ex-president Obasanjo’s third-term Presidential dream that was truncated with sudden humiliation.