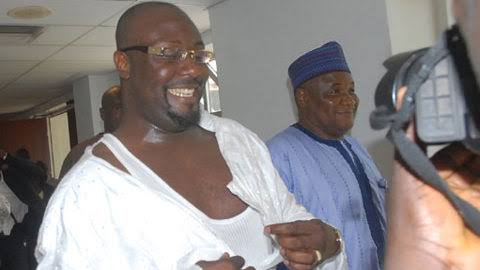 Some mothers do have them; and they have to manage them. These saying captures the interesting gospel according to Dino Melaye of the National Assembly of Nigeria and the ordeal he’s currently going through from his embittered constituents in Ijumu federal constituency of Kogi State.

The loquacious lawmaker whose various political and personal antecedents go before him is not a happy man at the moment due to series of battles he’s daily fighting from within and from without. Global News can now reveal the extent this flashy senator has gone to make sure he’s not kicked out of the upper chambers of the National Assembly as the call for his removal gathers momentum.

Senator Dino Melaye who about a month ago deeply enmeshed in alleged certificate forgery scandal that very well tarnished his not-so-clean image is now running helter-skelter trying to retain his seat at the house of senate just as one hundred and eighty thousand have now signed the petition calling for his removal from the exalted position due to what they call his neglect of constitutional duties to his senatorial district.

According to a Global source who is close to one of the aides of the embattled senator, Melaye is leaving no stone unturned in his desperate bid to retain his “shaky” seat at the country’s upper house. And as desperate moments call for desperate measures, Senator Dino Melaye is now fast becoming a desperado in his efforts to sustain his membership of the “esteemed club”.

And apart from openly begging his fellow senators to come to his aid and help him retain his position as a senator, Global News also learnt Melaye who is a strong ally of Senate President Bukola Saraki and some principal officers in the senate now move around in the wee hours of the night looking for where to “pin down” his mates and curry their favour as far as the issue of his impending removal is concerned.

INEC further heightened Melaye’s tension when the body released on Monday the 3rd of July released the schedule of activities for the recall of Melaye who is representing Kogi West Senatorial District in the Senate with August 19 fixed for the verification of signatures of petitioners demanding his recall. The constituents had earlier submitted sacks of documents which they said contain signatures of more than half of the voting population of Kogi West Senatorial District , which Melaye represents.

They also submitted a full register of the said signatories and a letter, asking INEC to begin the process of bringing home Melaye and ultimately conduct a bye-election to replace him. And with the first stage of INEC’s verification exercise slated for July 10, 2017, Melaye is just doing the right thing by prostrating for whoever could assist him from the unprecedented disgrace that’s lurking around his gate.