…Calls on family to re-examine his state of mental health. 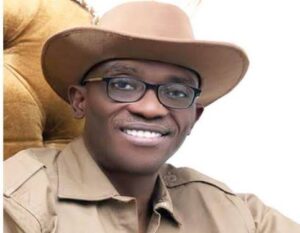 The Lagos State chapter of Labour Party, under the leadership of Comrade Olukayode Salako, has on Wednesday, taken a stance behind the party’s National Working Committee in passing vote of confidence on the National Chairman of the Party, Comrade (Dr.) Julius Abure, while applauding the party on its decision to relieve the acting National Publicity Secretary of the party, Mr. Abayomi Arabambi of his duties.

Recall that the National Working Committee of Labour Party, had on Friday, December 9, 2022, decisively terminated the appointment of its acting National Publicity Secretary, Abayomi Arabambi, and dissolved the Ogun State chapter of the party, over the audacious and insubordinating role they played in the alleged expulsion of the Director General of Obi-Datti Presidential Campaign Council, Dr. Doyin Okupe, and other inglorious anti-party activities manifested around the period.

The National Working Committee subsequently passed a vote of confidence on the leadership of its embattled National Chairman, Comrade Julius Abure, having reviewed the corruption allegations leveled against him and found him not culpable.

Passing the vote of confidence on the National Chairman of the party, Salako said that Comrade Abure is a passionate party man, who is intentional about his party, forming the next national government in Nigeria, and as well, taken over good number of states in the country, come 2023 general election.

Salako said that Abure’s zeal and believe in Labour Party project, has spurred him and other party members to work assiduously for the victory of Mr. Peter Obi/Datti Hammed, and other candidates of the party in 2023.

He, in his own impression, absorbed the national chairman of any form of possible corrupt practices, or selfish financial aggrandizement, insisting that though it may not be out of place for party members to appreciate the Chairman with cash, or material gifts out of their own volition, and for their own reasons and purposes, which is very normal for personalities, holding such exhalted offices.

But, when such is received, it shouldn’t ever be taken for corruption.

‘Members of the party can decide to give in whatever form, in appreciation of the good work their officials are doing for the party’, he said.

The Lagos state chapter of the party is, therefore, calling on Mr. Arabambi’s his family, acquaintances and cronies to help with his mental health, before it gets out of hand.

The party said Arabambi, through healthy-talk therapy, with loved ones, could certainly go a long way in restoring and stabilizing his physical, mental and psychological wellbeing.

The Arabambi I have known and related with in about 5 months, I have been running the affairs of our party in Lagos here, hasn’t ever behaved like a normal human being, who is sincere about his purpose for being a member of the party.

‘All along, his character, and the way he behaves in the party have been very strange’.

It’s hilarious how Arabambi accuses the National Chairman of forgery and fraudulent malfeasance, but in the actual sense, he is the Chief Executive Officer of malfeasances, who went about collecting in different from and manners from candidates and members of the party to fix their names as candidates for the next year election.

His reckless behaviors have caused the party from fielding candidates in strategic positions in the party for the forthcoming general election, especially in almost all the south west states.

As it stands right now, the Labour Party chapter of his party in Ogun State, does not have candidates at all for the forthcoming elections in the country.

That Arabambi, whose unguided utterances, depicts of one, suffering from diarrhea of the mouth, equally accused the leadership of the party of forging the Appeal Court judgment of September 18, shows that he is under a serious spiritual spell and needs proper mental re-assessment at this point.

Besides, Arabambi has no constitutional rights to discuss the financial issues, or court cases of the party in the public domain, since he is neither the Financial Secretary, nor Legal Adviser of the party.

If truly the National chairman is guilty of his allegations, what’s preventing Arabambi from bringing out the evidences forth?

He is said to have been acting strangely like someone, suffering from partial amnesia for some times now, and Lagos State chapter of the party, uses this medium to call on his family, especially his wife and children to pay adequate attention to his mental health.

It is worrisome that at this critical time of the party’s structural formation, and the nation’s history, when peace, love, progress and success should be the unifying force, Arabambi who has been saddled with the responsibility of being the national voice and image maker of the party, chose to be about the only South West national official of the party, who has publicly been standing against the party, and has become a misfired arrow in the hands of the OBIdient movement.

Salako seized the opportunity to call on the national leadership of the party to see Arabambi’s shameful shenanigans as a lesson, not to allow incompetent, self-serving, unqualified, greedy and corrupt elements like Arabambi, from either holding such a very important position, or speaking on behalf of the party in future, especially when they are not authorizedly positioned to do so constitutionally.

The height of Arabambi’s anti-party activities became so worrisome to members of Labour Party, when it was discovered that he has been in an all-expense Ogun State government hotel, Mitros hotel, in Abeokuta for well over five months running.

Arabambi , whose stock in trade is destabilizing the structure of the party across the south west, while grandstanding with his position as the party’s Publicity Secretary to serve the purpose of his pay masters, who are already jittery of the giant strides of the party in these states, and, therefore, recruited a willing mole in the person of Arabambi to continually destabilize the chances of the party in the forthcoming elections.

Salako opined that relative peace has since returned to Lagos State Chapter of the Labour Party, since the expulsion of the Judas in the midst of the party, while reminding Arabambi that he has never been a card carrying member of Lagos State chapter of the party, so had no locus standi in the first place to interfere in the activities of the party in the state.

He urge all well-meaning Nigerians and Labour Party faithfuls to remain focused on the price, which is to ensure Labour Party becomes the next ruling party in Lagos, and by extension Nigeria.

The Lagos Labour party, however, reminds Mr. Arabambi of the damage he is deliberately doing to his own political life and future in Nigeria.

Because, in politics, history does not forget and hardly forgives.