A group of professionals that draws its membership from all over Nigeria has called on former Akwa-Ibom State Governor and Minister of Niger Delta Affairs, Senator Godswill Akpabio to step out and run for the presidency of Nigeria.
The group, known as the Godswill Akpabio Uncommon Transformational Support Organisation (GAUTSO), posits that with what Nigeria is experiencing today, only a proven leader and an accomplished performer like Senator Akpabio can take us out of the woods and calls on the popular politician to throw his hat into the ring.
In a statement signed by the group’s spokesperson, Chief Bennett Akar, GAUTSO noted that Nigeria has reached a stage where it can no longer gamble with its future.  In their own words, “we have looked at all the people who have so far declared their interest in the presidency and we have come to the unimpeachable conclusion that there is none that has Senator Godswill Akpabio’s political profile and track record of achievements. Nigeria needs an experienced, tested and steady hand as its pilot at this point in time.”
According to Chief Akar, apart from being energetic and focused, Akpabio has exhibited uncommon courage. “One of the biggest challenges Nigeria is facing at the moment is insecurity. Nigeria needs a tested and proven man of courage to manage its security architecture and rid the nation of these criminal elements”.
In Chief Akar’s words “When the Niger Delta militancy was at its peak, Sen Akpabio was one of those patriotic Nigerians who braved the odds, stepped into the ring and found this win-win solution that has held the region at peace till today. He has demonstrated his political sagacity in recently meeting with a Niger Delta warlord and finding a peaceful way to calm frayed nerves. Nigeria needs a leader who is proactive and has problem-solving skills.
“Still speaking about courage, we know how he followed through the forensic audit at the Niger Delta Development Commission (NDDC). He rose above stiff opposition to get the job done. In addition, under his leadership, NDDC moved to its permanent headquarters after many years, saving the nation millions of naira.
Akar also noted that the group was also inspired by Sen Akpabio’s power of vision and capacity to keep his promise. “When he was sworn in as governor, he declared that Akwa Ibom will no longer be known as a state where people come for houseboys, maids and cooks, that he will return the indigenes to their pride of place. He delivered by embarking on a massive free education programme in both primary and secondary schools, enacted a law to make it illegal for parents not to send their children to school and then gave incentives to headmasters and principals.
“Furthermore, as a detribalized Nigerian, the schools were open to indigenes and non-indigenes. This kind of unity is what Nigeria needs at this time that many regions are crying about marginalization. Sen Akpabio is connected to people from all ethnic groups in the country. This he clearly exhibited when he was Chairman, PDP’s Governors’ Forum and also the minority leader of the Senate.
That is not all “Everyone knows there is a synergy between quality education and security because though national security is the first duty of every government, education is its foundation. Senator Akpabio clearly knows how to tackle these head on and resolve them very quickly”
In addition, Chief Akar stated that a visionary, dynamic, effective, efficient and credible leader is what the nation needs to continue the present government’s infrastructural policies. “Akpabio became popular in Nigeria because of his investment in infrastructure, anyone who has been to Akwa Ibom in the last 6 years will see the infrastructural renewal in the state, he was incomparable amongst his peers and therefore the best person to continue with President Buhari’s current infrastructural development programme’.
Chief Akar revealed that Sen Akpabio being a former student union activist and student parliamentarian, is youthful, and has the charm, the charisma and the gravitas to connect to the next generation. “His easy-going nature, always fair but firm attitude, has certainly endeared him to the youths. He inspires the youths to greater heights.
“Having developed energy infrastructure via the Independent Power Projects (IPP) as Akwa Ibom state governor, Sen Akpabio has demonstrated good understanding of the need to immediately arrest the energy crises as a key to shoring up the economy and creating jobs, both of which are urgently needed today.

“A man who has done something before, can only get better at it and with his experience. We are certain that Sen. Akpabio is sure to return Nigeria to its rightful place in the comity of nations” 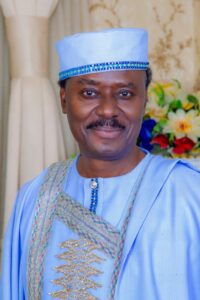