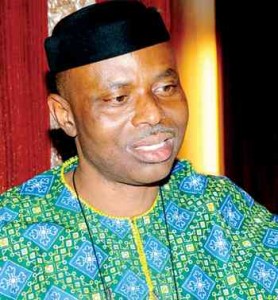 It is no longer news that Dr Rahman Olusegun Mimiko has been attracting unnecessary attention of the whole world to himself in recent times obviously for the wrong reasons.
It all started months back when he introduced what he dubbed the residency card termed “Kaadi Igbe Ayo” in Yoruba language which he said is a proof that anyone that has it is a bonafide citizen of Ondo, the Sunshine State.
As laudable as this project which can be likened to the national identity card project embarked on during the regime of ex-president Olusegun Obasanjo is, this one of Mimiko is full of controversies.
Trouble started during the launch of the card when Mimiko announced to the surprise and dismay of the helpless people of Ondo State that the card would be “purchased” with 2000 naira. They question the rationale behind the sale of a residency card that is supposed to be free in the first place as even the national identity card was distributed free of charge.
You will recall that a newspaper report had quoted Mimiko as stating that “it is a no card, no access plan” and that they intend barring those without cards (commonly known as “kaadi igbe ayo”) from any of the government’s heath care, economic and educational benefits.”
To make matters worse, Mimiko read the riot act further that the card was mandatory and whoever was not in possession of the card would be denied apart from the ones mentioned by the newspapers, virtually all the basic amenities of the state. People of Ondo State and no-indigenes all over the world have continued to react to this move by Mimiko who months back defected from the Labour Party {LP} that brought him into power over six years ago to the then ruling Peoples Democratic Party {PDP}.
Many people have faulted the move calling it anti-people, wickedness and scam of the highest order! Ondo, being a state dominated by civil servants, artisans and farmers most of who find it difficult to afford three square meals a day, make people wonder why such hardship is being unleashed on them by a governor they voted for overwhelmingly. One of the people that have led the movement against this latest extortion by Mimiko recently is the pioneer soordinator of the State Information Technology Development Centre (SITDEC), in Ondo state, Engr. Tunji Ariyomo. Ariyomo lambasted Governor Olusegun Mimiko for “intending to force Ondo State residents to part with N2,000 before obtaining Residency Cards.”
Reacting, Ariyomo said, “We miss the point of leadership once we equate it with an unfettered opportunity to fleece rather than feed the masses.” He stated that there was no record yet that the people of Ondo State had resisted or abandoned their statutory responsibilities in terms of payment of extant dues, taxes, levies or charges. According to him, to impose further sanctions upon them in this austere period in form of a N2,000 “kaadi igbe ayo” (Residency Card) levy is the height of public administration’s recklessness and uncaring attitude calling it sheer wickedness. Continuing he said, “Information Technology is designed to make life more comfortable for the masses. It was never conceived as an instrument of terror as the government of Ondo State is now doing.
Current technology in fact does not require you to own a card or carry one before critical data on a subject could be collated, preserved or accessed. Especially with advancements in biometric technologies; fingerprint minutiae and iris recognition technologies have been standardized.
“Their patterns become unique grids that could be activated for verification or processing purposes using machines at the point of use. This makes the need for the subject to own an expensive card superfluous, archaic and unnecessary.
“Our civil servants are in pain because they are now being regularly denied their monthly salaries. While it is an issue of common sense that multiple cards being produced by federal and state governments for similar or adjunct purposes without synergy and proper integration only lead to duplication of expenditure, outright profligacy and unnecessary but clearly avoidable financial burdens.”
Ariyomo, who added that he restrained himself from joining the growing opposition voices to the leadership styles of the governor over the past years out of sheer respect for his person, further noted: “This present move to further pauperize the people of Ondo State and make them pay undeserved penalties for sins committed by strata of governments in Nigeria that refused to make provisions for the rainy day despite our recent unprecedented oil-boom is simply the height of it.”
“There are tons of incredible win-win options and opportunities for massively increasing the Internally Generated Revenues of Ondo State or any other state in Nigeria. These they have refused to explore. This fixation with punishing the masses as the only means of increasing revenue is unacceptable and condemnable,” he concluded. It has also been revealed through our investigation that from next month {September}, Ondo State residency card will start attracting taxes. How long this will last, only time will tell!