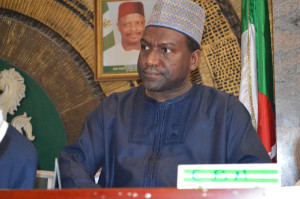 < [showads ad=GLO] />All recently seems to be no longer at ease in the establishment of Sanni, the careless brother of the Africa’s richest man Alhaji Aliko Dangote, as Nigerian banks that loaned him money have recently been employing all means to recoup their money from this Harvard University-trained businessman.[showads ad=GLO] It started some days back when the Union Bank in an injunction obtained at a Lagos High court froze Sanni’s Dansa Group of Companies’ account in all banks over the failure of the company to pay about N5 billion lent him by the company some years back and which has not been fully paid till date.[showads ad=GLO]

In the injunction, the Federal High Court in Lagos ordered that the 20 commercial banks in Nigeria should dishonour all withdrawal cheques from Mr. Sanni Dangote, and his companies, Dansa Foods Limited and Bulk Pack Services Limited. [showads ad=GLO]Justice Okon Abang, who made the order in a bench ruling, said the order would subsist till September 11, 2014, when the court would entertain all applications in the suit brought by Union Bank Plc against Dangote and his companies.

Union Bank had taken the case to court when it was obvious about N5.2bn loan granted the companies since September 2008 may not be paid and that rather than service the loan, Sanni was busy investing in other businesses and this it was that forced the bank into taking the move as he was discovered to have started diverting the funds to Dubai in the United Arab Emirates, Canada and Switzerland. [showads ad=GLO]

However in a new twist to the whole show, two other banks have prayed the court to be joined in the suit against Sanni and his companies over monies borrowed from their banks also. Diamond and Zenith Banks had appeared before the court on Thursday and explained that Dangote was equally indebted to them.[showads ad=GLO] Zenith Bank came out to explain that Sanni was indebted to the bank to the tune of €7m, the amount a source revealed was partly used to make the purchase of a Tetra Pack machine for his Dansa Fruit Juice while the rest was diverted to some other business.

Meanwhile, some former staff of the company in management position were of the belief that Union, Diamond and Zenith Banks’ debt are just a tip of the ice-berg as the businessman could be indebted to the tune of about N20 billion and that his confidence to owe must have been as a result of the fact that he thought his well-known elder brother would do all in his power to redeem the name of his family which may involve him coming to his aid in the payment of the debt.[showads ad=GLO]

This we gathered has been the case in the past as his Nigeria-trained but highly successful brother has been forced to come and bail him out of such financial crisis, the last which was said to have infuriated Aliko Dangote, his elder brother, who was determined not to have anything to do with his debt but was forced to shift his position through the intervention of their mother who, it was revealed summoned the two home after which he was assisted again. [showads ad=GLO]However, we are yet to confirm if the mother would once again prevail on the brother to come to his aid again.[showads ad=GLO]

It could be recalled that Global News had published in a previous edition how the wasteful brother of one of the shrewdest businessmen in Africa has been doing all in his power to drag the name of the family in the mud with his careless investment strategies. [showads ad=GLO]Sources close to the company revealed the latest may have put a clog in the wheels of the company’s attempt to secure an investor as it was recently revealed that a South African investor was on the brink of injecting funds into the business after careful audit by KPMG. However, the recent amount being mentioned and the revelation of his trying to ship funds from the company abroad has called to question his character, and this sources revealed, is making the investor develop

Another source revealed that Sanni’s deficiency businesswise is obvious with his decision to be allegedly delving into the production of powdered milk sachets. [showads ad=GLO]According to the source who is a former staff of the company, it is not the milk business that is seen as the problem but the manner in which he chooses to run it. The allegation was that he would approach the makers of Cowbell milk where he would make orders for their unpacked powdered milk after which he would take it to his factory to bag and attempt to sell in the market to also compete with the company from where he bought the milk. This singular act, the source stated, has seen him losing so much money to the competitors as his price is always higher than that of others in the open market.[showads ad=GLO]

His bad judgment on his personal business and his recklessness with money, unconfirmed sources alleged, are forcing his brother to restrict his access to money in his brother’s company, Dangote Group, where he’s the vice president, so as not to give room for an opportunity to run that the same way he’s running his own Dansa Foods.[showads ad=GLO]

Recalled from our previous edition, there is a Yoruba saying that warns against looking at the achievement of somebody else in our pursuit of money, wealth and other material things as such may lead to disappointment since we are all made with our different unique features; but this is directly playing out in Sanni, the intelligent but over-ambitious younger brother of Africa’s richest man Alhaji Aliko Dangote, who is the chairman/chief executive officer of Dansa Foods as well as the vice-president of Dangote Group.[showads ad=GLO]

Investigation reveals that Harvard-trained Sanni Dangote has been over-stressing his personal company all because he sees his brother as a competitor, whereas the brother who is generally addressed as Africa’s richest man sees him only as his brother. It was before now the belief of many that Dansa Foods was a subsidiary of Dangote Group as the company’s sales cars carry the logo of Dangote Group. [showads ad=GLO]The company’s warehouses are usually in the same premises as that of Dangote Group; the difference is just that the company is solely own by Sanni Dangote.

Years back, the company that has its factory somewhere around Abule-Oshun, was thriving in the country as it could confidently compete with other companies that were into the production and distribution of fruit juice with its Dansa fruit juice.[showads ad=GLO] After that the company’s dairy product, Ziza, which is without doubt the best among its peers was also launched and this was followed by the company’s table water, Mowa, as well as its carbonated soft drink, Kally. With all these products in high demand in the country, it is believed that the company should be self-sustaining; but the news filtering out of the company is that the once-thriving company may soon be announced to be bankrupt. This is because of a recent market survey that showed the products of the company are recently hardly seen in the market these days. This may not be unconnected with several reports of breach of the trust of its distributors who used to make up-front payments for the products only to be disappointed when the company could not supply them. [showads ad=GLO]This in turn has forced distributors who are still willing to make purchase to resort to a cash-and-carry system of transaction.

Global News reliably gathered that the fortune change of the company might be direct fallout of terrible management policy of the Harvard University-trained chairman/CEO of the company Mr Sanni Dangote, whose decision to burden the profit of the company in his quest to rival his elder brother’s Dangote Group. This he does by forming other companies that he runs with the funds of Dansa. [showads ad=GLO]Unconfirmed sources revealed that he has been securing loans from financial institutions in the name of Dansa only for him to divert such money to other businesses while the loans are being serviced by Dansa every month. This has led the banks to freeze the company’s operational money, which in turn has been making it extremely difficult for the company to operate profitably of late.[showads ad=GLO]

Sources revealed that the present condition of things in the company has forced it to lose some of its top management staff to other companies when the company started owing them salaries and also found it difficult to manufacture its products to full capacity owing to the fact that the banks which it is owing debits any amount paid into the account immediately it is deposited. [showads ad=GLO]One source specifically revealed that the billionaire elder brother of Dansa Foods owner, Aliko, had at a time assisted his younger brother with some amount that ran into a couple of billions, only for Sanni to divert the amount into other businesses believing Dansa Foods had the capacity to take itself out of the financial doldrums it was forced into by his odd business management style.[showads ad=GLO]

According to a former staff of the company, it is only a matter of time before the company is declared bankrupt due to the unprofessional practices of its CEO. [showads ad=GLO]While dismissing the fact that the company is an arm of the Dangote Group, the former staff explained that Dangote’s sales trucks and cars cannot be found to be so unkempt as the ones that the sales representatives of the company are currently working with and that it will be impossible for Dangote Group’s products to be off-shelve for any reason.[showads ad=GLO]

1 thought on “Why Sanni Dangote Goes Bankrupt … How he usually competes with elder brother, Aliko”