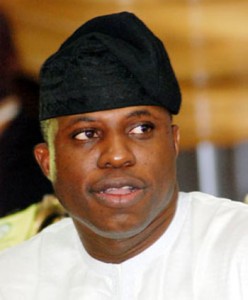 The N10 billion loan rocking the House of Representatives has already taken a new dimension. The latest report is that the scandal has even divided the civil society groups in the country.

While some groups are defending the speaker, Hon. Dimeji Bankole that he is a victim of political witch hunting, and innocent of all the allegations made against him, others are calling for his interrogation.

Meanwhile, information gathered by us suggests that the ordeal faced by Bankole in the past one month is the handiwork of his political enemies who saw the Economic and Financial Crimes Commission (EFCC) as a willing tool for the hatchet job.

According to what we were told, the trouble in the house was as a result of the decision of the members of the house to get a loan to run their offices.

Investigations has revealed that Hon. Dimeji Bankole was not on seat when it was decided by the whole members of the House that they increase the running cost of each member from N27 million to N42 million.

‘It was the deputy speaker of the House, Nafada that presided that day. Infact, the speaker was at a function at the University of Ibadan (U.I), where he went to commission the E-Learning centre of the university.’

‘when Dimeji came back, he was told of the decision and at a house session he asked the members if that was their decision and they said, Yes. He then set up an ad-hoc committee made up of one member each from the 36 states and a member representing Abuja . The committee members were 37 in numbers and they authorize the house to source for the fund which ran into N10 billion.’

‘All the members got the money and the loan was debited into their individual accountS with the United Bank for Africa (UBA)’, our source revealed.

We further learnt that the repayment of the loan was built into the 2011 budget, but with the delay in passing the 2011 budget, it was difficult for the bank to credit any member with their money as the House allocation has not been released by the ministry of finance.

‘Most of the members spent the loan on the last elections, but unfortunately, majority of them lost. When they came back to the National Assembly after the house reconvened, they met empty account and now saw that the loan had been put in their account which they must pay back’.

Our source declared that the earlier suspended members of the House including Hon. Dino Melaye ,who blew the whistle, were not in the House when the decision for the loan was taken. So, he was surprised when he was told that the House has taken a loan.

Meanwhile the anti-Bankole members in the House decided to take advantage of the uproar in the media about the N10billion loan to launch an attack on the speaker.

We were informed that Hon. Solomon Awhinawi, an arch enemy of Dimeji Bankole in the House, sponsored a youth group to write a petition that Dimeji took a loan of N10 billion. Awhinani told the youth group to send the petition to Ibrahim Larmode, the Head of Operations of the EFCC. Our source said that Hon. Awhinani and Lamode are very close friends.

‘What Awhinani actually wants is to destroy Dimeji’s reputation in the media because he has been touted as one of those pencilled down for a ministerial appointment. So, they don’t want him to be a minister. That is the truth of the matter,’ the source stated.

We also learnt that Dimeji Bankole is also very angry with the leadership of the EFCC over the way the agency had allowed itself to be used by his political opponents by sensationalizing the whole issue in the media.

Our source said the purported letter of invitation sent to Dimeji by EFCC was actually sent to the Clerk of the House, and there was never a time the speaker asked that the invitation be rescheduled as claimed by the EFCC.

‘That was why Dimeji didn’t honour the invitation. Even the said letter didn’t specify why and what they want to question him about’, the source added.

However, last week, the outgoing speaker wrote a strong worded letter to EFCC where he accused the anti-graft agency of ‘sensational prosecution and conviction on the pages of newspaper on an issue as grave as corruption without communicating with him’.

Interestingly, it seems the EFCC is now troubled N10 billion as we gathered that all the loan was paid last week after the President Goodluck Jonathan signed the 2011 budget two weeks ago.

‘The EFCC is in a fix now because the money has been released by the ministry of finance. UBA has gotten its money and all the money meant for each member has been paid into their accounts.

‘They got their money last week Thursday, or have you heard about anybody complaining about the loan again? Even, Dino Melaye, Solomom Awhinani and other enemies of Dimeji have got their money. It has shown that EFCC is just chasing shadows’. Our source concluded.