Task  him to appoints security chiefs that represent federal character 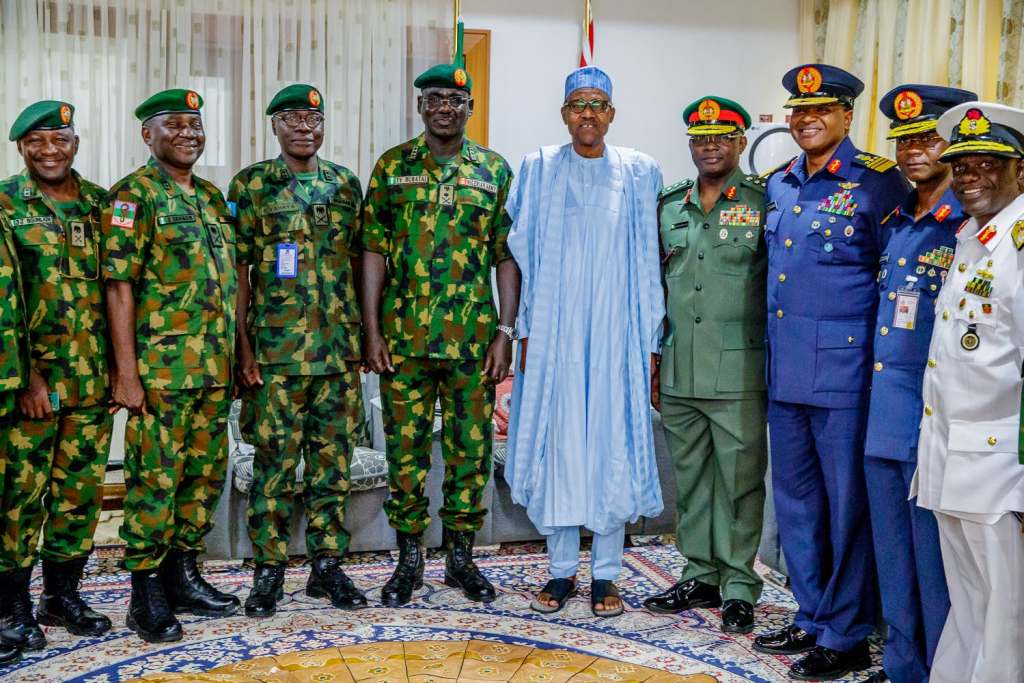 Northern elders have expressed disappointment in the New Year message of President Muhammadu Buhari, saying the inability of the president to yield to the desire of Nigerians by announcing the sack of security chiefs over worsening security problems in the country despite the overwhelming calls by citizens to that effect was disappointing, thus making the message empty.

This was as it charged the president to immediately do the needful by not only announcing the appointment of new security heads but also ensuring that the new security management team was in line with Nigeria’s federal character principle.

The Northern elder particularly said they needed the gift of new service chiefs from the president, adding that it was the only way the president can convince them of hope for positive results in the ongoing war against insecurity in the region in the region.

Noting that appointment of all the current security chiefs from the North worsened insecurity in the region as according to them, the development emboldened criminals, bandits, and insurgents following the kid gloves approach adopted by the security team, they insisted that for a new and positive result, there must be an immediate change of guard that reflect the federal character principles.

In a statement, Sunday, the Northern elders operating under the auspices of Coalition of North East Elders for Peace and Development, reiterated their earlier position that the security chiefs were not indispensable hence the need for their replacement.

In the statement signed by its national coordinator, Engr. Zana Goni, the Northern East elders noted that the continued retention of the service chiefs many years after the expiration of their retirement date in service was not only unconstitutional but that it had also weakened the morale of the military personnel and the front line troops.

Noting also that the continued stay of the security chiefs was not adding value to the nation’s security management team, the elders regretted that the rising wave of insecurity in the North was being downplayed by the media.

According to the group, “many people are dying daily in the North as a result of banditry and insurgency but the situation is being underreported.”

The group which appealed to President Muhammadu Buhari to listen to the voice of reason by relieving the security chiefs of their offices said such action coupled with increment in defense budget were the only ways to go for Nigeria’s security situation to regain its glorious place in history.

They advised President Buhari to try different hands in the security architecture, saying such action could not only bring back the high morale but also zeal and vigour in addition to career development in the military.

But the group said sending the service chiefs packing from their offices without an increment in the nation’s defence budget could also not get the country out of the wood, as according to it, robust budget funding would lead to the military having necessary tools to stand taller than their adversaries was imminent.

They insisted that the president must stop looking at the service chiefs as indispensable, saying there were more efficient and tactically trained officers in the military with valour to confront the adversaries headlong and end the nation over decade long insecurity, especially the insurgency and terrorism in the North.

“We listened to the New Year speech of Mr President to Nigerians with wrapped attention believing that he was going to give us a New Year gifts in new service chiefs but the president to our disappointment, was silent on this key issue in the lip of every Nigerian,” the statement said.

The statement added: “At the moment, the most important thing to every Nigerian is security. They want their lives to be protected first. The National Assembly has since understood this and that is why as representatives of the people, they have since been calling for more robust, efficient, and effective security management for the country.

“They recognized that this cannot be achieved without emplacing a completely new security architecture in place. That is why the two chambers of the legislature came up with resolutions seeking replacement of service chiefs but after many months of this genuine and patriotic call by the people’s representatives, President Buhari is yet to accede to their request. This is unfair to Nigerians whose lives are being cut down on daily basis.

“We still stand by the position of the National Assembly where members unanimously resolved that you relieve the security chiefs of their positions to pave ways for not only fresh hands but also fresh ideas in our security management strategies.”

“Sacking the current chiefs and subsequently replacing them with new ones will automatically change the game of insecurity as the morale of fighting officers will be boosted, new strategies will be launched beside the flow of intelligence information among the security agencies,” it noted.

Going further, the North East elders said:” We reiterate that President Muhammed Buhari, as a matter of urgent national importance, sacks the current crop of service chiefs over the state of insecurity in our country. Their sack will  no doubt be in our national interest, given that they seem to be now bereft of ideas on how to contend the security problems bedeviling our dear country.”

The elders said they were worried over the state of insecurity which they noted, was not getting better in spite of the relentless efforts of the president to that effect.

The ugly security situation, the elders said, has since robbed the country of food security.

They called on the president to rise to the occasion by hearkening to what they called the “voice of the majority” that new hands were needed to pilot the affairs of the country’s security architecture.

“While we are aware that Mr president gets a daily briefing on the security situation in the country, most of those reports they are given him are not a true reflection of the situation on the ground. Most of the reports you get are staged managed,” it said, adding that: “People are very angry with our government just because of insecurity and we must rise up to speak the truth at this time before it’s too late.”

The elders noted that “Already, there is low morale in the military over the continued stay of the service chiefs whose tenures in their various offices have since lapsed.”

“Who knows if there are unseen hands out there in the service frustrating the fight against insurgency and insecurity in the country deliberately due to the continued stay of the service chiefs? This is why we appeal to the president to hearken to the call by the majority of Nigerians as reflected in the country’s parliament recently that it’s time for him to do the needful”, they said.

Noting that, “We are in a constitutional democracy where any decision of government or leaders is taken from the popular view”, the group said “the majority of Nigerians have since spoken in this regard and even through their representatives in the legislature” they added that,” as a democrat, our president should listen to the voice of the majority for the betterment of Nigeria.”