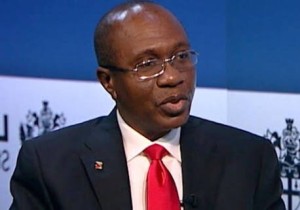 The Central Bank of Nigeria (CBN) has said that no Nigerian bank is ‘experiencing stress,’ and as such has not compelled any to recapitalise before June 2016.
This followed an online publication purporting that some deposit money banks in Nigeria are ‘experiencing stress.’
Describing as fictitious, CBN said the story as published “is not only false and baseless but a figment of the writer’s imaginations.”
Reuters news online had published a story last week in which it stated that Central Bank of Nigeria has given three commercial banks until June 2016 to recapitalise after they failed to hit a minimum capital adequacy ratio of 10 per cent.
According to the Reuters report which made reference an October 30 report of the CBN, claimed that the three banks were not named, but they were said to be among the group of 14 in Nigeria that have licenses to operate as regional and national lenders, with respective capital bases of N10 billion ($50 million) and N25 billion.
In a statement signed by CBN’s Director, Corporate Communications, Alhaji Ibrahim Muazu, the apex bank stated categorically that: “The CBN hereby assures the banking public that the Nigerian banking system is sound and all banks are in compliance with both the regulatory and prudential requirements.”
It further recalled that the Governor, on November 24, 2015, during the Monetary Policy Committee (MPC) press briefing, also made it categorically clear that no Nigerian bank is in distress.
“The CBN therefore urges all bank customers and the general public to disregard the publication as it is false, mischievous and aimed at throwing the banking public into unnecessary panic,” the statement read in part.
Meanwhile, responding to media enquiries, Wema Bank Nigeria Plc has already said that the Bank it is not among the banks asked by CBN to recapitalise.
According to the bank, its present Capital Adequacy ratio (CAR) is presently 18.6 per cent (based on Q-3, 2015 results) significantly higher than the 10 per cent CAR required for regional and national bank.
The bank has existing shareholders funds of N44billion; significantly higher than the N25billion shareholders funds required for national banks, hence the request by Wema Bank to apply for the license.
“The Bank’s decision to go National is largely for us to be able to take advantage of any opportunities where they exist. Our approach to the implementation of a national banking expansion will be a phased roll-out of branches.
“First, we will quickly open branches in locations where we already have existing infrastructure and captive business to ensure we take immediate advantage of the latent business opportunities in these locations. Subsequently, we will take a cautious approach to expansion and only deploy resources to areas that have been assessed as commercially viable,” the lender wrote in an email response to newsmen.