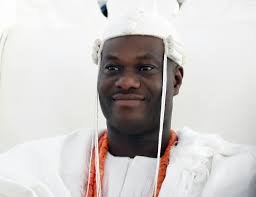 The Ooni of Ife HIS IMPERIAL MAJESTY OONI ADEYEYE ENITAN BABATUNDE OGUNWUSI, OJAJA II has been fingered in an illegal land grab in high-brow Ikoyi, Lagos.

Global News has authoritatively gathered that the land adjacent to 6, Ondo street, off Niger street which was allegedly owned by Argyll & Kingston Limited since 1994 has been illegally hijacked by His imperial Majesty,Oba Adeyeye Enitan Ogunwusi,Ojaja II.

We can now reveal that the new Arole Oodua and the de facto number one paramount ruler of the Yoruba race has, as a matter of fact, commenced erecting structures on the said land which is located on one of the choicest areas in the country with a view to further announcing his arrival as a power that be in the country.

However, the said property which allegedly belonged to Chairman of Argyil & Kingston Limited, Bashorun J.K. Randle, who is another powerful figure in the country is now tearing the two powerful men apart as the Ooni of Ife claims he has the full right to the property which according to him was sold to him by the Onikoyi of Lagos (Chief Fagbemi Onikoyi).
The dispute on the land took a dramatic turn as Bashorun J.k Randle went to court to seek redress and got a favorable judgment Suit No: ID/1172/1993 at the High Court of Lagos state where Hon. Justice M.O. Obadina (Mrs.) ruled against the claim of the Onikoyi family to the land in dispute.

Meanwhile Global News gathered that despite the court order and pleas from well-meaning Nigerians. His Majesty is hell-bent on cementing his new status as he has ordered workers to continue with the building construction. He has also gone ahead to erect a signboard on the property (to ward off trespassers) with the inscription: “THIS PROPERTY BELONGS TO THE OONI OF IFE, HIS IMPERIAL MAJESTY OONI ADEYEYE ENITAN BABATUNDE OGUNWUSI, OJAJA II’’