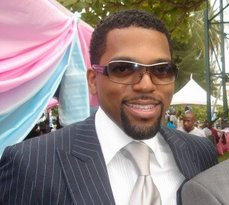 On the Island social scene, it is proper to say that anything can happen at any time without prior notification. So as a tabloid with expertise in dishing the dirt of celebs, we are always on the lookout for breaking news in the social circle. But even with our sophistry and dexterity in exposing the most notorious of celebs and socialites, we did not see this coming. In fact, it arrived with the speed of light and for very obvious reasons, the powerful authorities refused to take the light hence allowing everyone present to watch the scandalous show of shame.

The story you are about to read is as true as the word ‘truth’ itself. But before going into the main gist, it is very important that we, in our usual tradition explicitly analyse the gladiators of this movie. Only then will our readers get a comprehensive knowledge of what really happened. On a certain Friday in April 2014, two Lagos big boys fought themselves silly at the newly opened Quilox Night Club on Ozumba Mbadiwe, Victoria Island. But it was even the cause of the fight that makes the whole gist more interesting. The bitter fight was between former director of now defunct Oceanic Bank, Obaro Ibru and popular musician/artiste, Lynxx. The cause of the fight was delectable and sexy Miss Loiuse Priddy.

We start with Obaro; to many people on the Island, Obaro Ibru represents many things to different people. They see him in different light because of the colourful lifestyle he lives. He is the over pampered son of Olorogun Michael Ibru and Cecilia Ibru, the former MD/CEO of Oceanic Bank who was later convicted for basically swindling same bank in which her family owned controlling shares. Many years back when his mum called the shots at the bank, Obaro was a director in the same bank. As we always say, put a mediocre with a modicum of brain on any family business, such business will sink as there are other dedicated and knowledgeable staff who are more committed. The Ibrus’ reign on the bank was not only a monumental failure, but a colossal loss to a lot of businesses as they mismanaged depositors’ funds with impunity. In fact, Obaro is known to have given quite a number of his friends and girlfriends unsecured loan facilities.

Step in Lynxx, born Chukwuka Edozien. His parents are upper middle class successful business operators. Chukwuka Edozien grew up on the Island and attended the very posh Corona School from where he gained admission into the Federal Government-owned Kings College, Lagos. Most of his classmates who knew him in Corona said on arrival at Kings College, Lynxx quickly shortened and funkified his name from Chukwuka to Chuki and after his stint at the prestigious school, moved over to England where he attended the University of Hull. It is pertinent to mention that Lynxx, who is even from a less rich home when compared to Obaro, is in fact more of a seriously spoilt kid. Fact be told, Lynxx music is neither here nor there. He is no Dbanj neither are his tracks as widely acclaimed as Davido’s or Wizkid’s. But due to his family background, he is well accepted amongst the crème-de-la-crème of Lagos Island social establishment. He has the Glo and Pepsi endorsements, thereby indicating he is a good role model, but opposite is the case. Like notorious artiste Ikechukwu who started well but eventually turned into a thug and today is nowhere on the music chat, one can say that Lynxx has now come to represent everything violence. Month after month, there are wild tales of altercations with fellow clubbies notably London big boy Pope who runs a chain of Nigerian restaurants in the UK and whose two sons are now playing in the lower division of the English Premier League. Lynxx miscalculated by taking a violent fight with this man that if not for his father’s involvement, his fingers were almost burnt, as the London big boy was poised to make a mess of him.

Louise Priddy is also known as Louise Bacchus on account of her ownership of the defunct Bacchus Night Club. She ran Bacchus for many years and was successful at it until the rude manners of her staff forced another spoilt child of one of the richest black women in the world to buy up the building housing her club and throw her out in the streets (this is a gist for another day). It is a known fact that running a night club is also like running an illicit prostitution ring as they go hand in hand. Louise Bacchus is known to have a coterie of light-skinned/half-caste female friends who are notorious chain smokers and drink worse than the Liverpool football thugs.

In the group of girls she carries about is also Otas Osaze, the very notorious Island big girl who was caught pants down by her husband having sex with their domestic staff! She was thrown out of that marriage and has since remained a regular feature in all known night clubs and wild parties. In the early hours of Saturday 12th of April, 2014, clubbers at the high end Quilox night club owned by Ibadan-born Shina Peller were shocked as this legendary fight erupted. Louise Priddy as usual sat with some of her notorious female friends together with Lynxx; they drank, smoked, flirted and danced to the hit tunes of in-house DJ. As this went on, Lynxx who is now frequenting the gym and has developed thick arms and biceps was the centre of attention. As the girls clearly enjoyed every bit of him until Obaro Ibru, the money-spending spoilt brat whose stock in trade is popping endless bottles of champagne,suddenly came. When Obaro arrived, the girls quickly acknowledged his presence, even the madam-general, Louise Priddy welcomed him so dearly. As Obaro settled into the clique of these party animals, he realized that one person on that table was obviously not doing what the rest were doing as Lynxx had squeezed his face in that very arrogant street manner that is reminiscent of jailbirds in Rikers Island correctional facility, New York. Lynxx knew too well that Mr. Money, Obaro Ibru’s presence that night was seriously going to alter his fun as money rules the world. Even with whatever endorsements he has or music hit he rakes up, Obaro would spend Lynxx’s entire earnings in a night and not feel it in his endless pocket. So the tension was so high that everyone there could cut it with a knife.

There were eye contacts between the two of them that seemed to scream “I hate you”, “I will f—k you up”. Their body languages were obviously pointing to a messy fight and indirect talks were thrown on the table. But Obaro felt that insubordination from a small boy like Lynxx was enough and that he had to be taught a lesson there and there. As Obaro confronted Lynxx with the question, “Why are you acting like you can’t see me on this table? Am I too small for you to greet?” Lynxx the thug was not going to have any of that bullshit and he replied, “So who the f—k are you? I don’t f—-king care about you so deal with it.”

Because Louise Priddy and her runs girls were all there, Obaro had to live up to his name as the godfather. Before one could say Jack, it was blows and fisticuffs and Obaro’s body guards immediately went for Lynxx who was no pushover as his boys were on ground too to quell the aggression from Obaro’s guards. It is important to note that Lynxx moves about with a group of drug-filled, bloodshot-eyed and tough talking street boys who love to fight everywhere. These boys come to clubs and are so high on skunk, cocaine, prescription tablets and all manner of illegal highs that at the slightest provocation, they unleash violence on you. Lynxx who is not just one of them but the leader is also believed to be heavy with drugs as his posture and mannerisms in clubs indicate. As the pandemonium was becoming uncontrollable, club owner Shina Peller knew he had to do something drastic, so he immediately signaled his boys to throw Obaro out of Quilox! Yes, Obaro was thrown out and it was at Shina’s command. As the club owner, Shina felt he needed to get Obaro’s boys out to forestall huge damage to his property and business. But Obaro wasn’t leaving victory in the hands of an unaccomplished music artiste who still lives in his father’s house. So they waited outside for Lynxx and when he stepped out, the fight went full blast. It was a horrific sight as people scampered for safety. Different theories have been given for the real cause of the fight as everyone knows too well it didn’t just start that night. Some posit that since Obaro and Lynxx are both good at getting high and rocking the both sexually, they might have had prior bedroom moments now gone wrong because on the Island drug filled party scene, you would be shocked who has slept with who. Others say that Lynxx’s beef with Obaro might be with the humiliation he put his cousin Linda Edozien through many years back. Many years ago, Obaro Ibru was ‘selected’ to date Linda Edozien who had just walked out of her then upcoming wedding to a super loaded Lagos big boy after she discovered the guy’s sexuality was for same sex.

As she spread the gist around town, other big boys who were not only friends with her estranged hubby but also sexual orientation mate set her up with Obaro who went ahead to record some dangerously intimate clips of the short lived affair and also played this clip for so many big boys. This shocking event shook the Island to its very foundation and Linda Edozien was forced to temporarily relocate abroad to bury the shame. A lot are saying that the Edoziens never forgave Obaro for that despicable show of shame. Even at that, some other theories are still being analysed with Madam runs herself, Lousie Priddy being mentioned in it. For lack of space, we shall leave that for now. That Saturday, both Lynxx and hot pant Obaro Ibru, now boss at Aero Contractors airline, went home promising a better return match. The highly anticipated part two probably in their bedrooms will have us on live coverage. What a shame for two young men who are meant to lead other young boys into better lifestyles for the betterment of our society, doing the contrary.