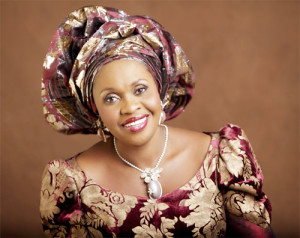 Welcome to the multibillion dollar world of Hajia Muniat Bola Shagaya, the diamond-loving best friend of Patience Jonathan, the powerful Nigeria’s first lady. For Hajia Bola Shagaya things have never been so good as it is at the moment. Yes, she was very close to the Babangidas, in fact her relationship with the late Maryam Babangida was what brought her to prominence. Even though it was like a mother-daughter relationship, Hajia Babangida was a well-travelled international lady, so there was not really much Bola could teach her that she did not know. She also moved close to the late Stella Obasanjo but it is her closeness to the current first lady that has since set things on the overdrive. Apart from a huge economic hurricane that has placed her permanently on the richest list, Bola Shagaya has now ventured into the very murky world of Nigerian politics and most significantly has arrived the scene gun blazing. Yes we can tell you confidently that Hajia
Muniat Shagaya, as she is fondly called in Ilorin has bullied her way into relevance in Kwara State politics. She has used her closeness to Mrs. Jonathan to create a big commotion in PDP Kwara State. From the start, she knew too well that the Sarakis controlled Kwara and that even though Bukola has moved to APC, she still has senator Gbemisola Saraki to contend with. So she strategically cut Gbemi to size with the help of the first lady, Mrs, Patience Jonathan. She fielded her son, Sherrif Shagaya as a PDP aspirant for the House of Representatives candidate for Ilorin West and Asa Local Government Areas. Even though her son Sherriff was a completely unknown figure in the whole of Ilorin, save for his mother’s closeness to the first family he went ahead to win the PDP ticket in what has been described by most party members as the daylight robbery of the century. The party delegates were never in the control of Bola Shagaya so she devised a highly
criminal way to outsmart the other contestants. In Abuja, she assembled a large group of people using the original list of the party delegates in her home state, she gave them all a brand new identity that bore the names of all the already authorised delegates by INEC. Then she also had military personnel assigned to help her achieve this evil plot from the Army, Navy, Air-force, Police, Civil Defense, name it, to take over the entire Ilorin town and the venue of the primaries. In fact, her own delegates were first to arrive and smartly impersonated the entire delegates and it was beyond shocking to all. As she was gladly and shamelessly assisted in this heinous crime by the Nigerian military who would be much appreciated if they were warding off Boko Haram attacks.
When the original delegates arrived, they were all refused entry into the venue of the primaries by stern-looking military officers who on crosschecking their names on the list of delegates informed them that all these names had already gone into the venue and that there could not be double names in there! Shocking as it sounds, this is how Bola Shagaya got her son to win the PDP ticket for Ilorin West and Asa Federal Constituency. The people were bitter but retreated to fight another day, so during the gubernatorial primaries the same people she rubbed off their victory teamed up together to deal with her. This time they decided that any other person aside from her candidate will win the primaries. Her candidate was Dele Belgore who had decamped from APC long ago. She choose Mr. Dele Belgore after reaching an iron clad agreement with him that she will indirectly run the state should he succeed in his bid to be governor. Dele Belgore is just a packaged
man; Bola was the financing godmother. On that day, she was seen spending cash for cash on a legendary scale, openly bribing delegates from all sides. She and her team attempted to change the venue but other aspirants resisted her and when she tried the same impersonation trick it fell flat as party members openly dared her and the military men she took to Kwara. So frustrated was she and her team that she lobbied that the primaries be cancelled and slated for another day but on the new appointed date, she lost flat as her sponsored candidate was abandoned by the delegates for three-time serving senator from Kwara South Senatorial District, Senator Simeon Ajibola. She couldn’t believe her eyes as her money and clout failed to work on that day. Now Bola is trying to manipulate the president and PDP top shots to drop the real winner, Senator Ajibola and announce her man, Dele Belgore as the PDP flag bearer for Kwara State. It is considered an abomination
in politics, so let us see if she can pull it off. However, the entire PDP in Ilorin had a secret meeting few days ago to concede the Ilorin West federal constituency to APC at the general election just to simply punish Bola Shagaya for stealing their votes, meaning that at the general election even PDP loyalists will not be voting her son Sherriff Shagaya; and everybody in Kwara is anxiously waiting for the election day to know where the pendulum will swing to.