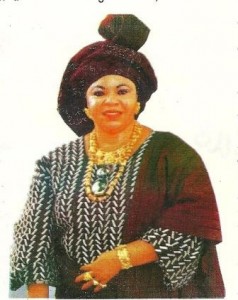 Following our epic three-part story on the Ilodibe household and the gladiators therein, there has been a tremendous posture by the general public who does not know what is going on in the family since the demise of the patriarch of the family, but the main character in this epic drama, high chief Mrs. Ifeoma Stella Ilodibe, a.k.a. Nwanyi Diya Tubelu Ugo has decided to take legal action on what she terms defamation of character and libelous slander of her name.

She says she does not wear gold and diamond jewelries like we had earlier reported and that she neither usurped her late husband’s estate to have it all alone. Well, unknown to this very obstinate society matriarch, who was even uncontrollable during her husband’s lifetime, we knew much more than we had earlier reported but we were only being very economical with the real issues and facts at hand.

Before we went to press with this earth-shaking exposé our team of investigative reporters had carried out very extensive and well-documented research on the person of Ifeoma Ilodibe in what will become the most sensational exposé on any society lady in the history of investigative journalism from this part of the world. We present to you part four of the uncensored true story of Chief Mrs. Ifeoma Stella Ilodibe.

Ifeoma Ilodibe was born in Awka, Anambra State to the family of late Mr. Francis Ibeto and Mrs. Esther Ibeto of Umuenem village, Otolo Nnewi. Her father was a renowned artist at the Teachers Training College, Awka, and at the Comprehensive College Hilltop Enugu. He wrote and sketched one of the very first Igbo literature books, “Okeke Tara Ose Oji, Da Nani Tie N Mkpu” with Samuel Ahamba. He was an exceptionally quiet and demure man. Her mother was a renowned personal secretary for many years, she was a touring private secretary to the first Nigerian president, late Dr Nnamdi Azikiwe and later she continued to work for Major General Aguiyi Ironsi in the same position.

So powerful was her mother that she still extended her secretarial prowess to the late Brigadier General Ogundipe,. All these men were all at that time in the Presidency, State House, Lagos. It is a known fact that while the husband was very quiet and reserved, Esther Ibeto was the one in the driving seat of that marriage; this we shall dwell more about as the story continues.

Ifeoma, having finished her primary education proceeded to Methodist Girls secondary School in Abia State after which she successfully obtained her HSC (higher school certificate), which is today known as A’ Level. She then began work as a trainee executive with Universal Insurance Company, Enugu.

During her youthful days, it is imperative to note that Ifeoma was the belle du jour of the men’s world; she was stunningly beautiful with an imposing height and luscious light-skinned body, and she spoke English with a very seductive Western accent and above all had a high profile mother she could rely on for super elite contacts. It was this notoriety that led to her so many relationships with different men at that time, which in recent times she has sought to cover up some of the glaring consequences.

Unknown to most members of the Lagos social establishment where this stupendously wealthy matriarch has held sway for decades, Ifeoma had a love child before she even met and married Ekene Dili Chukwu. Contrary to the impression she creates that Ekene Jnr. is her first male child, it is not true.

The name of her first son is CHIKE IBETO and she tried persistently to impose him on her late husband but the internal high-wired politicking in that family triumphed and Chike was kicked out unceremoniously from the Ilodibe Estate but for a very long time she installed him as the senior manager in the Ekene Dili Chukwu company. However, when the politics got on high tempo he was thrown out.

In order to save face, Ifeoma got him into holy matrimony and relocated him to the UK, where the light-skinned well-built tall Chike who is soft spoken like his mum now lives with his family.

Ifeoma’s case is not isolated as most of the society ladies who are well respected in the Lagos social establishments have the same sordid past even though they try seriously to rebrand with the help of their viciously acquired money.

In her writ of summons to us she claims that she is not a jewelry freak as we’ve made the world to believe; well for the avoidance of any doubt we re-emphasize that Ifeoma Ilodibe is not only a jewelry purveyor with unmatched credentials but she bestrides the workshops of the most exotic jewelers in Europe with class and well accorded dignity.

As at the time of filing this report, we were in possession of over 350 pictures (and still compiling) of this society damsel taken from as far back as 1974. In one of the pictures taken in 1976 when the current Obi of Nnewi, Igwe kenneth Orizu visited Lagos for the very first time, she was wearing a vintage off-the-shoulder outfit and killing accessories to die for. At a time when most women were style blind, it was very obvious that Obidie, as she is popularly called, had signed a lifetime agreement with high maintenance with retainer-ship with one of the most high profile gemologists from this country. We have been able to locate two of Ifeoma most patronized jewelers abroad, in subsequent write up you will know of price, time of purchase and even what informed her acquisition pattern of exotic jewelry.

As executive director of Ekene Dili Chukwu Nig ltd, director of Ekene Dili Chukwu Motors Ltd and CEO of Austin Print and Allied Industries (some of the firms within the Ekene Group) she had an unlimited pool of funds to play with. Diopside, garnet, kyanite, ruby, amber, amethyst, aquamarine, beryl, mandarin citrine, madeira citrine, feldspar, sapphire, emerald, jade, iolite, peridot, mother of pearl, topaz, red agate, champagne diamond, coral, zircon, quartz, kunzite and platinum are some of the exotic gemstones, diamonds and precious metals in her collection. A lot of the colored diamonds that Ifeoma has acquired are treated diamonds which is the trend amongst most global style icons. The process is known as colour enhancement which involves using clean diamonds and modifying their colour with a combination of electron bombardments and heat, using safe electron-accelerator technology, but you cannot talk about diamonds and gemstones without talking gold and platinum because it is on this precious metals that the jewelers strand the rubies and so on. Ifeoma’s collection of gold jewelry is very unusual. Her necklaces and bangles cannot be measured in grammes like that of the average society ladies, but in troy ounce. The term troy ounce was named after a weight system used in Troyes, France during the Middle Ages. Unknown to many, an ounce of gold is 10 per cent more than the ounce one finds at the grocery store; an ounce of 18k gold weighs 31.10 grams.

In 2009 when top society lady Cordelia Agboti and her husband Senator Azu Agboti hosted their son, Obinna’s wedding, it was the ounces of intricately set gold metal that she had on that set most society women gazing in awe. Some contended that she must have won over 20 ounces of Italian gold that day, put that cost to embellishments on the said precious metal and craftsmanship then we are talking real money! Ifeoma does not do small measures. At any given time you sight her at society parties she has huge and exquisite rings on all her fingers.

Most times she stacks three rings per finger, so that leaves an average of 17 rings on both hands at any given time. Lord have mercy!

In the jewelry world, her buying prowess can be matched by only a few filthily rich matriarchs. The pictures and verification reports are there to prove it, so Obidie as she is usually called, will look like a clown in the dock when the time comes.

Her coral beads which have become a reference point amongst those who know bear the hallmark of the best of Italian craftsmanship. That she has usurped her late husband estate is obvious to all and sundry. Her late husband mandated the first son Ekene Jnr. to ensure that all members of the family are well taken care of after he is gone. As a traditionalist, he vested central power in him as his heir, but today Obidie has total control of her son and has refused to let any of her step-children have even the minutest of basic amenities to themselves.

Questions for her if she says otherwise: why are you then in the court of law with your stepchildren and co-wife? Why did you instruct your mother Mrs. Esther Ibeto to go and lock up the family house in the village? Why did your son travel to Onitsha to question whichever family member was selling off the luxury buses at the Onitsha terminal? Why was Ekene Jnr, the group managing director of Ekene Dili Chukwu severely beaten up at Onitsha and why was he flown abroad after then?

Ifeoma Ilodibe must be a very delusional lady to think that she can posit fallacious nonsense. When Ekene was alive he gladly asked his old-time friend who was a London-based taxi driver to help him get an apartment in London. The taxi driver did not want his billionaire friend to live far away from him whenever he was in London so he got the late chief a house in Brixton, a notorious part of London ruled by Jamaican community. Those who know London well will agree that Brixton is the Oshodi of London.

But as soon as the chief was gone, she dug her hands into the endless money pot and has purchased a befitting apartment in the posh end of London, That’s Obidie for you! Could she have done it if her late husband were to be alive? Never!

The story of this gorgeous lady that is very respected amongst the movers and shakers is just beginning. In our next edition we shall serve you live from Otolo Nnewi, the true story of how she met her late husband and her never before mentioned lover! Yes lover! By the time this epic series is over the litigant will definitely become the respondent! For Ifeoma Ilodibe it is not yet uhuru!