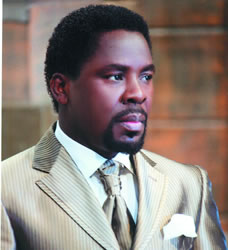 The trend of things in the country can well be defined as too cold for comfort but that notwithstanding Nigerians are known to have endured all sorts of hardship which ordinarily would have made any other boil. However, the recent turn of things in the country has shown that the perseverance of the people may have reached the breaking point and it was this that took the center stage recently in Lagos when the general overseer of Synagogue Church of All Nations, Prophet Temitope Balogun Joshua during his sermon revealed that he saw revolution in the country.

The potency of the prophesies and predictions of the prophet is not new to most people in the country and that is the reason his Ikotun, Lagos church was the first point of call to Major Hamza Al-Mustafa the Chief Security Officer (CSO) to the former military president, late General Sani Abacha, who visited him just to attest to the potency of his prophecy after he foretold of his travail and his eventual release even after he had initially been sentenced to death by one court.

Prophet Joshua in the sermon said he had been saying it that revolution would happen in Nigeria after which it will spread to other parts of the world. He claimed this would happen because of the role the elders in the society were taking as most of them refused to retire thereby leaving no vacancy for the young ones. The prophet who gained more prominence from his miracles and many accurate predictions, one of which was his prediction that the now dead Ghana president, Prof. Attah-Mills would emerge against all odds which came to past,

however,proffered solutions that can help avert the revolution which he said is job creation and creation of a new social value system.

According to the prophet, “Ninety per cent of Nigerian youths believed it is by becoming political thugs that you can be successful because there is no job since those that occupy these political offices refuse to retire. Instead for them to retire and become elder statesmen they are still holding political offices. In politics, the way out is that the youths should be considered for important positions such as assistants to the elders. Where the elders are ministers the youths should be junior ministers.” He stated that the little example can change the situation of things.

He explained further that it should be brought to the notice of everybody that revolution is coming except the youths are co-opted into the political sphere of the countries around the world and the companies and other businesses should also follow suit by making youths junior administrators. He emphasised that political parties should appoint an elder as the chairman while a youth will be appointed as junior chairman under him, because there are professors among the youths, doctorate degree holders and many others who are in the range of 20 to 50 years, stating that the reason they should always be made second in command is to train them to take over in the future.

Knowing fully well how accurate his prophesies had been in the recent past it is the belief that the leaders should take them serious and act on them to avert the revolution which he said will see people taking to the streets because situation has ensured that life has little value to most youths. He recalled that he had been saying it for more than five years before we started witnessing what is currently happening around the world now.

5 thoughts on “There Will Be Revolution In Nigeria Soon – T. B. Joshua”