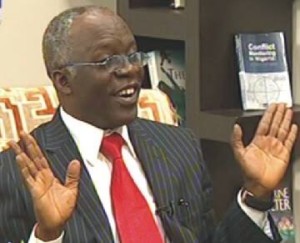 For 16 years that the Peoples Democratic Party was in power, the federal government exhibited total contempt for the Rule of Law. The Constitution and other laws were breached with impunity while court orders were disobeyed on a regular basis. In the famous case of Attorney-General of Lagos State v Attorney-General of the Federation (2005) 2 WRN 1 at 150 the Supreme Court held that “In our democracy all the Governments of this country as well as organizations and individuals must kowtow to the due process and this they can vindicate by resorting to the courts for redress in the event of any grievance.”

One of the reasons why Nigerians voted for the candidate of the All Progressive Congress, General Mohammadu Buhari (rtd) during the last general election was his promise to fight corruption and end impunity in the country. Upon winning the election, President Buhari further pledged to abide by the Rule of Law. To that extent, he has a duty to ensure that all organs and officials of the Government operate within the ambit of the law. In particular, he should not allow overzealous security personnel to engage in any form of impunity and thereby expose the Government to unwarranted embarrassment.

In July last year, the State Security Service (SSS) searched the private residence of former NSA, Col Sambo Dasuki (rtd) at Abuja. When Col Dasuki alleged that his house was illegally searched, I pointed out that the action of the SSS was justified as there was a search warrant validly issued by a magistrate court in the federal capital territory that authorised the search. He was eventually charged with money laundering and criminal diversion of huge sums of public fund before the Federal High Court and the Federal Capital Territory High Court at Abuja. Notwithstanding the gravity of the offences, both courts have admitted him to bail. But after he had met the bail conditions the SSS decided to rearrest him at the gate of Kuje prisons on the ground that investigations have not been concluded in respect of other criminal allegations.

The decision of the SSS to ignore the order admitting Col Dasuki to bail coupled with the failure to re-arraign him on fresh charges is tantamount to impunity in every material respect. If the federal government were aggrieved by the order admitting Col. Dasuki to bail it should have challenged it in the Court of Appeal. Much as the Nigerian people are fully behind the Buhari Administration in the patriotic move to recover the looted wealth of the nation, the federal government should be advised to ensure that the procedure for the loot recovery meets the tenets of the rule of law. The SSS and other security agencies should therefore refrain from allowing corruption to fight back by playing into the hands of the criminal suspects who have committed crimes against humanity by diverting money earmarked for the procurement of arms and armament to fight the terrorists.

In the same vein, the order admitting the leader of the Indigenous People of Biafra, Mr. Nnamdi Kanu, to bail should also be complied with. If the federal government has other charges against both suspects it should file them in the court. There is no provision for keeping criminal suspects at the pleasure of security officials. Meanwhile, all valid and subsisting orders made by courts in favor of criminal suspects should be obeyed without further delay.

To ensure that suspects are no longer held in custody in any part of Nigeria without any legal justification section 34 of the Administration of Criminal Justice Act has imposed a duty on each the Chief Judges to designate a Chief Magistrate and a Judge of the High Court to visit all police stations and other detention centers within their jurisdiction, at least once a month. During such visits, appropriate directives shall be given while any officer who detains any person illegally will be sanctioned.