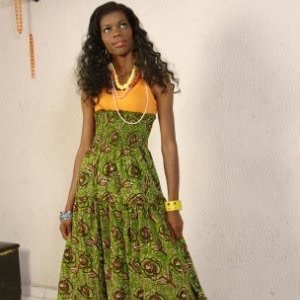 According to an African adage, ‘one with money is majority’. When things seem down for someone in life, a lot of people would run from that individual, even those very close to him including his family members, either immediate or nuclear; but when the person gets his groove back and then begins to make more money, all those who deserted him surely come back and stick to him. This is a similar story to that of one of Nigeria’s most creative fashion designers, Tessy Oliseh, the owner of wave-making label, Tesslo Concepts.
Few months ago, Tessy’s Tesslo was rated among top fashion labels in Nigeria which include the likes of Mudi, Nobel Afrik, Emmy Collins, Frank Oshodi, Deola Sagoe etc. However, the gist in town from a reliable source close to the Olisehs is that when the going was somehow rough for Sunday Oliseh who retired from active football at an early age in 2002 and went abroad to search for greener pastures, some of his family members allegedly including Tessy forgot about him and only communicated with him once in a blue moon. They all deserted their residence in an estate tucked somewhere in Agege area of Lagos State before the elder brother Churchhill Oliseh founded a soccer academy, Ebedei FC which became his own source of income. Tessy, it could be recalled once sat for her WAEC final exams at a school known as Summit International Secondary School located in Ojodu area and got married to Ohimai Amazie, a politician who doubled as a youth leader and special adviser to top PDP stalwart and radical politician Senator Musiliu Obanikoro.
Now that those at the top echelon of the Nigerian Football Federation (NFF) have found a new bride in Sunday Oliseh as the man who can take the Super Eagles of Nigeria to the next level of success, Tessy has suddenly found her brother worthy of being a PA for. She is now spotted everywhere her brother goes to the point of neglecting her fashion outfit to ensure she is always with her brother. Information reaching us is that some of her workers and trainees are worried about this latest development as their boss has suddenly turned to one of the ‘technical crew’ members of the Super Eagles of Nigeria even without being appointed by her brother’s employers, the NFF. Can someone please advise Tessy to face her business and leave her brother Sunday to settle down and face the huge task at hand? Why are the likes of Egutu and Azubuike their other siblings not sighted flocking around their brother like hungry bees? Only God knows Tessy’s plans. Someone hinted me that perhaps she may be lobbying for one post in the Super Falcons crew!