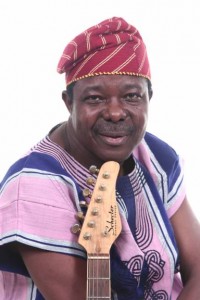 Self-acclaimed king of world beats, King Sunny Ade is not in the good books of some people right now as a result of some treatment they got from him in recent years. Top on the list of these embittered people is one of the members of his band, a guitarist by profession who goes by the name, Abiodun Fatoke. According to Fatoke who before his dismissal in 2007 had spent 30 years with KSA, being in KSA’s band for three decades is as good as being in the wilderness.

Hear him: “All through the years I spent with KSA, I cannot point to anything tangible that I achieved. Sunny Ade is a very wicked human being; in fact, he is a devil and I know that by God’s grace he will never die well. I have travelled with him through the length and breadth of this globe without anything to show for it. He treated all of us who were members of his band as mere trash. All our remunerations are not paid up till now. I would have been a better person by now if I had collected all the remunerations due me. In fact, all the royalties he has been collecting all over the years are going to his pocket without anything coming to those of us that contributed to the success of all his albums.”To show his wickedness and callousness, when Clinton  came to Nigeria and our band was invited by the Federal Government to entertained him and other world leaders present, we  went to Abuja despite the money we were paid do you know that he only gave us N200 for feeding.

When asked why he placed such a curse on KSA, he responded, “I am not the only one cursing him. Many people who have left the band or are still in the band as I speak are still cursing him because their lives are in total ruins. Tell me how I won’t curse this kind of person that I have served all my life and the only way he could repay me was to terminate my appointment abruptly?

“It happened that we had gone to his Ondo home town in Ondo State to perform. We had a very good outing that day and as usual after the performance he gave us the normal stipend that he normally gives us out of greed. You will not believe that considering how popular KSA is around the world and how big his band is, we only got N1,000 each. After the N1,000 was distributed to all of us, the names of about six of us were read out that we have been relieved of our jobs. Immediately we heard that, we were surprised and we tried to ask why our case was that of outright sack without query or anything, bearing in mind that we never committed any offence. We were said to have been retired and referred to KSA himself who is the chairman of the band. All our efforts to see him and present our case proved abortive as he was not ready to listen to whatever we had to say and that was the end. That was how I left the band with just N1,000 and all the 30 years I spent in his band got wasted.”

An enquiry into his activities while in the band was made to ascertain if he really had issues with KSA which in turn led to his sack and he fired back, “Like I said, Sunny Ade is just being wicked. I didn’t commit any offence that I know of. This is someone that I have suffered a lot to contribute my own quota to where he is today. I have been following him overseas since 1983. For you to know, I wasn’t the only one sacked. Even the manager and the captain of the band who actually started the band with him, he is popularly called Tunde Manager but his real name is Michael Tunde Babalola, was also sacked. So it is not a question of having issues with him. He is naturally a wicked human being. People who have worked with him can attest to this fact.”

He concluded that all his efforts to make peace with his former boss has failed as KSA has made up his mind not to have anything to do with him and the other members of the band that were booted out. “I have tried my best to ensure that I reached out to him to at least let him give me some money out of the money we all made together for me to go and continue my life but no way. There was a day he came to court for a case, I saw him and he saw me too. Immediately we saw each other and I was about exchanging pleasantries with him, he quickly changed his direction and started looking elsewhere. If not because of the kind of treatment meted out to us by KSA, I wouldn’t find myself where I am today but I know God will intervene and deal with KSA accordingly on behalf of all of us that he has treated unjustly.”

You will recall that 62-year-old Fatoke Abiodun, who has three wives, many children and grandchildren, a veteran guitarist was arrested by the National Drug Law Enforcement Agency (NDLEA) on Tuesday, 1st January 2013 while attempting to board an Air France flight to Italy at the Murtala International Airport, Lagos. At the time of his arrest, 1,575 kg of cocaine was found in his possession. He was subsequently charged to court for unlawful possession and exportation of narcotics and was first arraigned on Tuesday, 26th February and in May sentenced to three years’ imprisonment with effect from the day of arrest and currently serving his term at Ikoyi Prison.