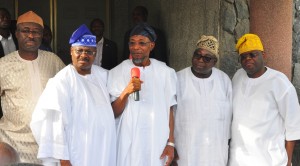 The Leadership of the All Progressives Congress (APC) in South West, Nigeria met in Lagos on Sunday where they restated their commitment to work together to move the country and particularly the region forward.

Osun State Governor, Ogbeni Rauf Aregbesola, who spoke to journalists shortly after the meeting held at the Ikoyi residence of former Governor of Ogun State, Chief Olusegun Osoba, said the leadership of the party in the region have resolved their differences and are more than ever ready to pursue an agenda for development of the region.

“As we are committed to doing that for the entire nation and through that support the effort at the national level to revive the Nigerian economy and put the people in a better stead than we inherited when our party took over governance in Nigeria.

Aregbesola expressed optimism that good governance and purposeful leadership can trigger the desired change, which according to him will not only profit Nigeria, but also the African continent and the black race.

“I have told you very clearly that the progressive leadership of the Yoruba race is now fully united and are ready and charged to lead our efforts to reposition our land and integrate with others nationwide to put Nigeria in its proper footing,” Aregbesola said.

Aregbesola seized the occasion to announce to journalists that Aremo Osoba had rejoined the APC from the Social Democratic Party (SDP).

“There was a time when Osoba switched to another party, he was a foundation member of the APC and he was in the APC throughout my election. Yes, he was for a time with the SDP, but with what we have just done today, Akinrogun Osoba, the Aremo himself, is back with the Progressive leadership of the Yoruba race”.