+ How the killer driver disgraced them on Internet 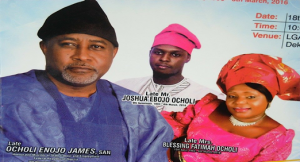 What a waste! What a waste! This was the sentence that rented the air across the length and breadth of Nigeria immediately the news of the death of late minister of State for Labour and Productivity, Mr James Ocholi (SAN); his wife ,Blesssing and son, Joshua was confirmed by the authorities in Abuja.

As many have started wondering what could have taken the lovely couple and their son away in such a-near mysterious accident, Global News can authoritatively report that there was more than meets the eye as per the accident.

The former Minister who according to sources was fighting internal battle from his constituency because of the political successes he has recorded in the recent past. According to sources, Ocholi who hailed from Ogbabede-Abocho in the Dekina Local Government Area of Kogi State was seen by some his political enemies in the State as the one ‘blocking the chances’ in the political scheme of things in that part of the country as he was well –liked to President Muhammad Buhari.

Many of his distractors according to sources had on several occasions questioned why Ocholi who until his appointment as Minister of state was the Deputy National Legal Adviser of the ruling APC. Many of these aggrieved people have always questioned why President Muhammad Buhari had to appoint him again as Minister of state and not one of them as ‘he is not the only’ one from that constituency.

A very devoted Christian and a strong believer in faith. A close ally of Ocholi’s close friends has, according to sources, implored him to step up prayers as his brilliance, soft approach and gentle demeanor would never be enough in Nigeria’s politics. This happened after Ocholi complained of some strange dreams he had in recent past to him.

As this is coming on the heels of the mysterious death of former Kogi state Governor, Prince Abubakar Audu, just as he was one the edge of history, one cannot but say that Kogi State’s politics is about to take over from Oyo State’s politics as the toughest and most diabolical in Nigeria.

Many who did not expect such fate to befall the brilliant and ebullient Minister at this particular point in time would argue that the driver and aide-de-camp of the Minister ought to have died immediately as they were seated in front, but though they are critically injured, yet survived.

And now that the cold hands of death has snatched the pragmatic, dynamic and brilliant Ocholi away, we can only pray that God Almighty would grant eternal rest to the Ocholis and the children the souls left behind.

Meanwhile The Ocholi family is working on some theories concerning the accident that their son and his family were murdered.

The family members believed that the driver of a car that somersaulted several times would ordinarily be unconscious and would not take photographs of the deceased and upload them on social media.

They also contended that the driver and the orderly should have cordoned off the place and evacuated the corpses as this had been the tradition whenever a VIP was involved in an accident.
Aliu said, “Distinguished Senator Ngige, I know you very well. When James Ocholi was told to work with you, I knew he was in good hands because the last time I saw you in Anambra State, we ate with you in your house as a governor.

“So, we want to know who recruited the driver, and at what speed (he was during the trip) to the extent that the corpse of the deceased cannot even be recognized. Can you imagine that? I am worried, it is worrisome.” Aliu added, “There was a kind of foul play in the whole exercise, which is very worrisome. Apparently, the driver who drove the car was the same person who took the photo of the dead man and sent it all over the Internet – whatsApp and others. So, the question is: how come that the driver of the vehicle in the same car was able to take the picture of the dead man? “The side of the door, where the Honourable Minister sat, was not properly locked because after the car somersaulted, the thing flung him and so he had a terrible and fatal damage to his body, which was beyond recognition. There was a foul play in Ocholi’s death.
“While I was in his house, I already knew because those who conspired and plotted it (the death) became jittery because I have never been to that house and they don’t know me. But somehow, they became jittery, scared and worried.

“This thing they did is political, it is a political war and some people want to score some political points against the system somehow. The death of Ocholi is quite suspicious. “So, I had to hurriedly leave because God has made me to know what happened and we know that they will get the people who are responsible. When you are innocent, God will always uncover how certain things happened. Ocholi’s death is a great loss to the common people of Nigeria. And the spirit of the common people of Nigeria is fighting back.

“The perpetrators want to derail the focus of this administration. They are looking for every way to put a wedge in the wheel of success. I can specifically pinpoint those who plotted these things. What they are trying to do now is to knock heads together and the earlier we get rid of them out of that place, the better. “As we were there, they were trying to get the contacts of the ministers that came there for condolence, making phone calls and reporting back to whoever is their manipulator. “They decided to get rid of Ocholi to derail the focus of the government. Ocholi was not smart enough to know that these things could happen. They have lost, failed and we will ask God to forgive them because they have taken a soul that they cannot create.”