Skip to content
The political misunderstanding between former Ekiti State governor, Kayode Fayemi and the national leader of the All Progressives Congress (APC), Bola Ahmed Tinubu has taken a new dimension. Feelers reaching our newsroom have it that the fight has now turned to a free-for-all where associates of the warring parties are throwing allegations and counter-allegations against each other. This is, of course due to the many ill-advised steps taken by Fayemi who was recently defeated by PDP candidate and current governor, Ayo Fayose. Those in the know attests that Fayemi is alleged to be doing everything possible to ensure that he dismantle the cordial relationship existing between Bola Tinubu and the new president, Muhammadu Buhari.
Penultimate weekend, it was gathered that Kayode Fayemi alongside some Buhari’s associates and mutinous party members from the South-west tried all they could to whittle down the influence that the national leader of the party, Asiwaju Bola Tinubu, would have on the new government. Tinubu, the party’s undisputed leader in the South-west, is widely feted as the force behind the merger of all the major opposition parties in the country which led to the emergence of the APC. Today, the APC with the hard work and resilience of Bola Tinubu has turned to the ruling party in Nigeria. Bola Ahmed Tinubu’s buoyancy was recognized by the new president, Muhammadu Buhari and this must have infuriated Fayemi who thought Tinubu wielded too much of influence and needed to be whittled down.
Additionally, one of the anti-party steps allegedly taken by Fayemi occurred in February when President Muhammadu Buhari visited the Chatham House in London. The action of Fayemi at the event was viewed as an example of the high-level intra-party politics playing out within the party. It was reported that the camp of Fayemi and that of Tinubu jostled to take the credit for producing the speech delivered by Buhari at Chatham House knowing that the speech would give the then APC presidential candidate a huge mileage within the international community. We gathered that prior to the event, former governor Fayemi had rushed in to write Buhari’s speech and presented it to him. However, Tinubu who asked whether the president’s speech had been prepared, was flabbergasted when he learnt that Fayemi had written the script and given it to Buhari. The Jagaban Borgu was not happy because he knew nothing about the speech despite being one of the party’s top strategists. TInubu asked that the speech be sent to him as a condition for him to attend the event. When he eventually got it, he turned it down because he felt the speech did not represent Buhari and the APC’s ideals properly. 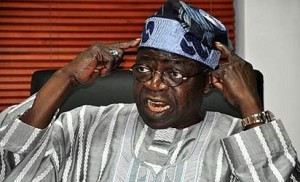 “He then asked a team of experts to write another speech for Buhari. Asiwaju had to explain to Buhari why he felt the initial speech written by Fayemi was not good enough.”
Moreover, it is certain that on this season of power transition from one government to another, it is not unusual for all sorts of characters, including ones with no iota of electoral value to mill around the new political leader so as to gain underserved access to the corridors of power under the guise of wanting to render ‘selfless service’ to the nation. In this regards, Fayemi has shown that he is only looking for any avenue to penetrate into the power circus and be a power breaker in the new government. We gathered that even some of his kinsmen who know much about him are of the view that he is indeed a confused man who never knew what he wanted in politics. According to one of them, Fayemi abandoned the politics of realism that brought him to power because of his disastrous miserly approach to politics that made him to make pecuniary profit from his own electoral failure while those people that are required to nurture the party that brought him to power wallowed in abject poverty. The source went ahead to confirm that Fayemi had a dalliance with Obasanjo even if such is ad-hoc as ‘a participant in Africa Leadership Forum’s CSSDCA initiative and its security and demilitarization series. He was also involved in several committees set up by President Obasanjo purely on a technocratic basis. For example, he served on the Presidential Implementation Committees on NEPAD, on the MDGS and on Security Sector Reform and Conflict Management. He was also the main Technical Adviser to the Oputa Panel set up by President Obasanjo to investigate human rights violations.” But this Fayemi spokesman forgot to tell Nigerians how much of public fund was expended on these projects and the degree of positive impact they had on the wellbeing of the populace. Could participation in projects that have not positively impacted on the lives of the people be altruistically described as nationalistic or rather, an ingenious means of creating money for the boys for their un-nationalistic ‘loyalty’?

That Fayemi at this point in time is trying to betray Tinubu who helped him to become the governor of Ekiti is not new to those who are very close to him as they claim that to betray those who helped him in one way or the other is his stock-in-trade.

Fayemi is also reported to have betrayed one of his close friends Opeyemi Bamidele who ensured that he had easy access to Bola Tinubu’s office when he was governor of Lagos State. Bamidele, then the commissioner for Information in Lagos State believed that as brothers, Fayemi should not find it difficult to see Tinubu and this is where the Jagaban alongside other political stalwarts in the then Action Congress (AC) took up the case of Fayemi before he emerged the governor of the state before he later lost to the incumbent governor Ayo Fayose.

Furthermore, another source affirmed that “to dispute the fact that Fayemi is a ‘political neophyte’ is to deny the obvious. The fact that he deprived incumbent Ekiti Governor, Ayodele Fayose, the senatorial ticket in 2011 is just a manifestation of his treachery against a man that really helped him prosecute the Ido-Osi election re-run that catapulted him to office. His betrayal of Fayose has been the hallmark of his relationship with his political benefactors, which is why Buhari must be careful with Fayemi’s sly personality.” 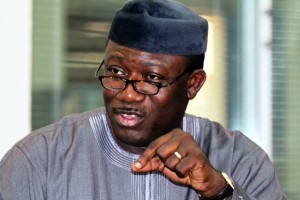 The people of Ekiti are not left out. Immediately he got the power he simply turned his government to elitist government; appointed many of his friends from Lagos while he abandoned the Ekiti people who voted for him not caring about their welfare again.

His kinsmen further labeled him as a failed governor who called himself a strategist but did not know how to strategize for himself to win an election. So, the question is, what kind of strategist did Kayode Fayemi claim to be? In another comment from a source close to him, he stated that “It is quite deluding for Fayemi to be alluding to his conspicuous public consumption as achievements. Could it be the pointless billion naira worth of government house that he built in a state that reeks of poverty that he calls an achievement? Could it be the un-used stadium he built when an old newly refurbished one is in place? Or could it be his abandoned costly entertainment centre in a state known for undying craving and pursuits for educational excellence? These, amongst others, are conduit pipes through which billions of naira were wasted in Ekiti under Fayemi that prompted the people to truly vote him out of power, the Ekiti-gate notwithstanding because the people would have revolted if the result had not reflected their true wishes in the 16 local government areas of the state.”

However, Fayemi, who seems to be very close to President Buhari is not keeping quiet on this issue. He is also warning Buhari to be very careful in dealing with Tinubu alleging that the former Lagos State governor is a cunny man, a corrupt leader and a man Buhari needs to keep a wide distant from. As the brouhaha goes on, many Nigerians are of the view that Bola Ahmed Tinubu has done his best in ensuring that Buhari emerges Nigeria’s president and also fought for the relevance of the South-west in the scheme of things in Nigeria’s politics. While a segment of the polity is alleging that Tinubu would want to impose his own people on Buhari, some others are saying that the military blood in Buhari would not succumb to such moves. But, with the involvement of Kayode Fayemi in this scenario, one wonders how the new government would form her cabinet and how they would work together for the real change the APC promised Nigerians.