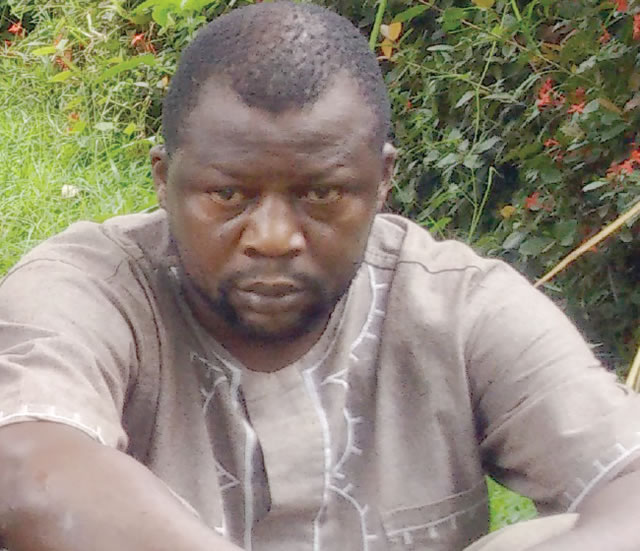 He used to be a famous herbalist, whom some people, both far and near, ran to for help at his shrine at No. 8, Oloti area in Iragbiji, Osun State, since he took over from his father in 2006.

But at the moment, 37-year-old Asimiyu Agboola, known as Alhaji, is cooling off in the custody of the police in Osun State for being the brains behind the killing of the Managing Director of Todays Prints, Olalekan Ogunranti, 45, who was kidnapped on May 16, 2016 in the state.

Ogunranti’s family had alerted the police when they lost contact with him on May 16 when he travelled to Osogbo on a business trip. They said an unknown person picked his call and claimed to have picked the SIM card on the floor at Iragbiji. Thus, they informed the Osun State police command and the Lagos State Investigation Bureau.

A police source told journalists that the Inspector-General of Police’s Intelligence Response Team moved in on the matter after weeks of “fruitless search” for the deceased, which led to the arrest of Alhaji and four other suspects, including Adesina Muyideen, 27, Ramoni Afolabi, 37, Akeem Akorede, aka Jaruf, 32, and Coker Daniel, 28.

In his exhaustive confession to reporters, Alhaji pointed out that Ogunranti was his client before his death but that he duped the deceased of about N3m, thus, he had to send his boys to kill him to prevent him from spilling out the beans.

Alhaji, seen as an expert in the cure of diabetes and fibroid, said the deceased was brought to his office sometime in March by two of his customers, Ramoni and Akorede, for help, which he rendered.

He began, “Five days after they mentioned him to me, they came with Ogunranti and after listening to him. I gave him a bill of N90,000 and gave him drugs and he left.

“Normally, we assess customer’s financial status before giving them bill. So I asked him to pay that amount because the people that brought him said he was rich. I removed N20,000, which is the real cost of the drugs, and shared the balance of N70,000 into two.”

Perhaps that was the beginning of their business relationship. Alhaji, who is married with children, recalled that 20 days after their first meeting, Ogunranti called back and sounded excited, because the drug he gave him worked and that his situation had improved.

“He requested to come and see me again and I said no problem,” Alhaji continued, “As soon as he came, he was so excited and promised to bring more customers. After the discussion, he said he wanted something that would make him rich. I told the people who brought him and they suggested that he must be a good victim to extort. So, I had to play along.

“I told them that I could do it, and that there were two categories of money ritual. The first was to get money and put it in a bag after some important rituals, and the money would multiply. The second would be to construct a big box and keep it in a room. After several days of prayer, he would be picking money from the box endlessly.

Alhaji said Ogunranti chose the first option; the one that had to do with the bag, because he said he did not have a place to hide the box. Then, he gave him the needed instructions.

“Two weeks later, he called that he had gathered N2.5m. I took the money and put ordinary paper and other stuffs in the bag and tied it up. I warned him not to open the bag until he was instructed to do so. I told him to return in four days with the bag. I told him that he was to bathe in a river which could be very close to where he was living. I gave him options and he chose Ijebu area. I also told him to come with N500,000 to buy more ingredients for the rituals.”

Notably, Ogunranti complained to his herbalist that he wouldn’t be able to afford to give out more money because he didn’t have money again. Alhaji assured his client that his money was on the way as they would soon conclude the preparation.

He continued, “I told him not to worry, and that he would soon be rich because what remained was not much. I told him to go back to Lagos that as soon as I got signal from the gods, he would open the bag. After 10 days, he called back, threatening to involve the government. He said he would arrest us. Then, I knew it was time to shut him up, so I called Akorede and Afolabi and we agreed to shut him up.”

That was how Ogunranti’s journey to the bottom began. Alhaji told journalists that he invited the deceased to come with N150,000 and a goat for the final sacrifice and that he would be able to use the money the moment they finished the sacrifice.

Unknown to the former MD, his herbalist had already initiated plans to eliminate him, as he had alerted and paid two cultists, Daniel and Biggie, to do the job, having helped them in the past.

“I did some incantations for them to become powerful when they were in school,” he said, adding that “I contracted them to eliminate the man. They suggested that he should be lured to a remote place where they would ambush him and kill him. “I gave them N120,000 to do the job.

“I knew the fastest way was to lure him to a river to bathe. So, we selected a river in Obokun in Osun State and I asked Olalekan (Ogunranti) to go the river and bathe as part of the final ritual. We assigned a motorcycle rider to take him to the location that we chose, while we were hiding in the bush at a distance.”

Meanwhile, Alhaji had instructed his client not to look back while having his bath and that if he did, the charm would no longer work. Painfully, that was his end.

“Ogunranti removed his cloths and started bathing when Biggie and Coker attacked him. They came to tell us they had killed him and cut off his head. I asked them where the head was and they said they had thrown it away,” he explained.

After the incident, Alhaji said his informant in the police told him the police were looking for him, thus, he had to run. He left his office and stayed in a hotel where he and his driver, Adesina, were later arrested by the police.

He however blamed the economic situation in the country for his action, saying his patronage had dropped because of the poor economy. “I’m a legitimate herbal doctor. It’s just that the situation of the country is very bad. People do not have money to buy drugs again, that is why I decided to take advantage of the situation to make money. It was when he requested for money ritual that I knew that he would be an easy prey,” he concluded.

In his own confession, Coker, son of a pastor, who hails from Auchi in Edo State and a graduate of Ondo State University, said he took to crime since he could not get a job after his National Youth Service Corps programme in 2011.

A statement by the Force Public Relations Officer, Don Awunah, said the suspects were arrested in Lagos and Ondo States respectively, while one of them, Coker Daniel, who is a 32-year-old graduate, led IRT operatives to Ibukun River in Ibukun local government area of Osun State where the mutilated body of the late Ogunranti was recovered. He said the body had been deposited at the Ladoke Akintola University of Technology Teaching Hospital, Ogbomoso.

The statement added, “All suspects confessed they kidnapped, killed and mutilated the body of the late Olalekan Ogunranti to stop him from disturbing them over the huge sums of money they duped the deceased.

“They led the police to a bush near a river where his headless body was found. It was also discovered that his manhood were cut off. Investigation is ongoing to fish out the remaining suspects who are still at large.”