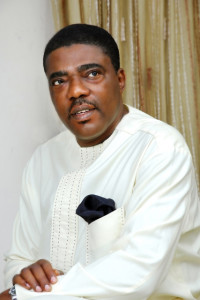 At the vocational training organised by the Senator who represents Lagos West in the Senate, 380 youths and women had undergone training in vocations such as: barbing, dish installation, bead making, shoe making, knitting, hair styling, fashion designing, costume and make up making among others for three weeks.

Consulting firm, Stable Technology under the leadership of Olukayode Amos, took the beneficiaries through the rudiment of their chosen vocations at the two centres of Mushin and Satellite town.

The beneficiaries, apart from going through training in the vocations of their choice, were each paid transport fare of N1,000 daily and given free lunch for the entire duration of the training programme, all courtesy of Senator Ganiyu Olanrewaju Solomon.

The graduation ceremony, which took place at the Blue Roof, Lagos Television on Monday was also the avenue for the Senator to distribute working tools and capitals to the beneficiaries.

Addressing the beneficiaries, Solomon noted that the initiative was to complement the efforts of the state government at reducing unemployment and poverty.

He said, “Some of the youths are unemployable because they don’t have skills that could make them entrepreneurs, and that is why we have embarked on this skill acquisition and training for them”.

The Senator, who represents the largest senatorial district in the country in the Upper Legislative Chamber, noted further that, “No government can employ every youths looking for employment, that is why youths should look inwards and channel their God-given ability in positive ways. This is aimed at taking some youths off the labour market”.

In his address, the Lagos State Chairman of the All Progressive Congress (APC), Chief Henry Ajomale, who also chaired the occasion, said the gesture is in tune with the capacity development agenda of the party.

“We have to commend Senator Solomon for this gesture and this what our elected officials should emulate. If others are doing similar things, unemployment will be reduced to the barest minimum,” Chief Ajomale said.

In his keynote address, the Lagos State Governor, Babatunde Fashola, SAN,  who was represented by the Permanent Secretary in the state Ministry of Commerce and Industry, Alhaji Wale Raji, said that Senator Solomon has shown through his commitment to youth development that he is a grassroot mobiliser who has the interest of masses at heart.

“It is a timely intervention to our state of unemployment and that is why we appreciate the gesture. We have to complement government effort to eradicate unemployment and poverty, and this can be done through empowerment and skill acquisition as done by Senator Solomon.

“In Lagos State, we have embarked on capacity building for artisans to upscale their skills and make their skills to be at par with modern technology. We have established 18 vocation and skill acquisition centers across the state,” Governor Fashola said.

Also speaking, the Lagos State Deputy Governor, Princess Adejoke Orelope-Adefulire, commended Senator Solomon for making it a point of duty to reduce poverty in the society through empowerment and skill acquisition.

Represented by the Permanent Secretary in the state Ministry of Women Affairs and Poverty Alleviation, Mrs. Risikat Akiyode, Princess Adefulire described Senator Solomon’s action as “teaching youths how to fish rather than giving them fish to eat. The former is a permanent gift while the latter is temporary joy”.

The Lagos State Deputy Governor advised the beneficiaries to make judicious use of the opportunity so that the sponsor will be encouraged to do more thereby giving others the opportunity to benefit.

Also speaking at the occasion, the Vice Chairman of the state chapter of APC for the Lagos West Senatorial District, Cardinal James Omolaja Odunmbaku, commended Senator Solomon for the gesture congratulating him for being an outstanding representative of the Senatorial District in the Senate.

Speaking on behalf of the beneficiaries, Akeem Adeyanju, a Yabatech graduate, lauded the gesture of Senator Solomon, explaining  that the skills and empowerment needed to pilot successful business has been given to them, adding that their endless search for employment has ended.