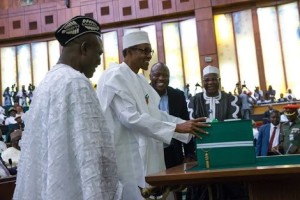 THE Committee on Education, on Monday, uncovered an excess N10 billion budgetary allocation to the Ministry of Education in the 2016 budget.
The committee, headed by Senator Aliyu Wamakko, shocked the Minister of State for Education, Professor Anthony Anwuka, when it confronted him with the discovery.
The committee had asked the Minster of State to explain how the personnel budget for agencies under the ministry jumped from N88,199,311,758 in 2015 to N98,181,570,237 in the 2016 budget document.
The minister, who could not provide immediate answers to the question, asked the Senate committee to take the matter up with the Permanent Secretary, Mrs Folasade Yemi-Esan.
Senate Chief Whip, Olusola Adeyeye, who is a member of the committee, had drawn the attention of other members of the committee to the fact.
He explained that this was the only sub-head which allocation was so increased, a development he described as very suspicious.
The Permanent Secretary, however, told the committee that: “The variance depends on the number of people that still exist on the IPPIS. So, it is an automatic thing. As people retire, automatically, the balance comes down. So, if they are not replaced by new staff, then we will have this variance. So, it’s not that we lost some money. If during the year, a number of people have retired, then the balance at the end of the year will be reduced.
“This is just an aggregation of all the agencies. So, we will look at it and see which ones, because it is off hand now, I don’t know which ones had the increase or if there is a marginal increase across board; what we have done here is to put together all the parastatals. But we can look at the details and find out which ones are increasing. Having this was not something that was imposed on the universities or polytechnics. They were the ones that submitted their personnel cost. It is not an imposition. It is what each university submits that we collate and put together.”
The committee was, however, not satisfied with Mrs Yemi-Esan’s response. They, therefore, directed the ministry to reappear and make proper presentation to explain the excess budget.
Senator Wamakko told the ministry: “Permanent Secretary, what you are saying is not enough. Maybe you need to be given time to give us the true position, because the issue involved is enormous. I need a good answer, not just this brush-on answers. I am not happy with the answer given.”
Culled from Tribune