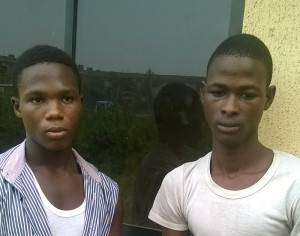 The police in Lagos have arrested two security guards, Muhammed Kiga and Joseph James, for allegedly setting two houses on fire in the Ajah area of Lagos State.

PUNCH Metro learnt that the two suspects, and one Musa, who is at large, conspired to commit the offence in November, 2015.

A police source said Musa and Kiga were employed to guard a property on Loius Fadipe Street, Thomas Estate, Ajah.

Musa, who owned a motorcycle, was alleged to have had a disagreement with the landlord after his motorcycle scratched the latter’s car.

The source said, “They had a disagreement and the landlord banned him from bringing the motorcycle into the compound.

“That angered him and on November 5, 2015, while everybody was asleep, he set the car on fire. In the end, three cars were burnt and the house was equally affected. It took the intervention of firefighters from the Lagos State Fire Service to put the fire out.”

PUNCH Metro was told that Musa fled the area, but 20-year-old Kiga, his assistant who had lost his job in the first house, was employed to watch over another house on the street in the presumption that he knew nothing about the arson.

Kiga was said to have employed 18-year-old James to assist him.

But on November 19, two weeks after the first incident, there was another fire outbreak in the new building, leading to loss of property.

Kiga and James were thereafter arrested by policemen from the Ajah division.

The matter was later transferred to the State Department of Criminal Investigation to unearth the circumstances of the two incidents.

Kiga, an indigene of Borno State, denied having a hand in the two fire disasters, but blamed the first fire incident on Musa.

He said, “I came to Lagos two years ago to work and make ends meet. I became a security guard in the first house and was assisting Musa. I was paid N20,000 as salary.

“Just four months after I was employed, Musa had a disagreement with the landlord. On the day of the incident, I went to sleep around 12am. He was beside me, but suddenly, he left my side. It was around 3am that Musa went and set the car on fire. I did not have a hand in it.”

Kiga explained that he got another job on the street, and had barely spent up to a month when there was another fire outbreak.

He claimed that residents sighted Musa, sneaking into the property to set it on fire.

The second suspect, James, told PUNCH Metro he relocated to Lagos when his school principal asked him and his colleagues to stop coming to school after the Chibok schoolgirls were abducted.

He said, “I was in SS 2 when the principal said we should stop coming to school because of Boko Haram. And because I could not continue to stay at home, I came to Lagos to work.

“I had barely worked for two weeks when the second fire happened and I don’t know the cause of it. I went to sleep around 12am and it was 3am that I heard people raise the alarm.”

The Police Public Relations Officer, Joe Offor, when contacted, promised to get back to our correspondent, but he had yet to do so as of the time of filing his report.