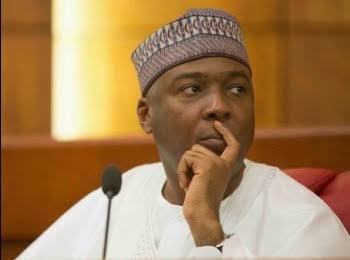 The unceremonious removal of the erstwhile leader of the Senate Ali Ndume by the upper house this week has thrown the house of Senate into turmoil and the action has again brought the unwholesome and dirty politicking of the President of the Senate Bukola Saraki to the fore.

Ali Ndume who is still very bitter about his acrimonious removal as the Senate leader by the house has pointed accusing fingers at the leadership of the upper house and has sounded a note of warning that the powers that removed him from the position is not done yet as the next person “might be (Ike) Ekweremadu” who is the deputy Senate President and Bukola Saraki’s strange bedfellow.

And according to Global News sources at the National Assembly, the atmosphere of the upper house is now so charged at the moment as Senate President Bukola Saraki has already concluded plans of pocketing the whole upper house in order to perpetuate his stay as the “Lord of the Manor” in the upper house where he holds sway .He is also trying to make maximum gains in the 2019 general elections.

Global News sources also hinted that Saraki who is reputed to be a maverick and dare-devil politician is working round the clock to uproot his political enemies from all the principal offices in both the lower and upper houses. And this medical doctor turned politician is capable of achieving this and more if his political antecedents is anything to go by.

Saraki who has a reputation of using and dumping people at will cut his political teeth under the tutelage of his late father Olusola Saraki. His father who was a powerful first republic politician paved the way for his son in politics and single-handedly made him the governor of Kwara State.However,Bukola later dealt a big blow to his father and political godfather when he failed to support his old man’s ambition of ensuring his younger sister, Gbemi succeeds him (Bukola) as the Governor of Kwara State.His father who never saw the betrayal of his son coming had earlier boasted that he would soon become father of two Chief Executives of Kwara State where he ruled as the grandmaster of politics for decades. “Baba Oloye” as he’s fondly called by his admirers never survived the shame and that act of disloyalty from his own son.And the rest as they say, is history.

The reputation of Bukola Saraki as a serial betrayal was again at play when he played a fast one on his party, the All Progressive Congress(APC) and the leader of the party,Asiwaju Bola Ahmed Tinubu and other chieftains of the party when he aligned with strange bedfellows in the People’s Democratic Party (PDP) in order to emerge as the President of the upper house against all the odds. Bukola Saraki’s anti-party moves saw him currying the favour of the PDP and entering into a pact with the opposing party in order to beat the candidate of the powers-that-be in his party in order to become the number three man in the country.

With the backing of a powerful northern politician and political network that stretches to the nooks and crannies of the country, Bukola Saraki is now the de facto Prince of Machiavelli of the modern day politics of the land and it is now very difficult for his foes from within and without of the APC to checkmate him or cut him to size. He is now so powerful that he can call the bluff of anybody in this dispensation.

Even as you read this,a very reliable source who is close to the Senate President confided in Global News that Bukola Saraki is just inches away from becoming the most feared and ruthless Nigerain politician of all times because of what he plans to do in the near future.There is no gain saying the very fact that Saraki at the moment has got most of the aces he needs to consolidate his power in Nigerian politics and he uses same at will.