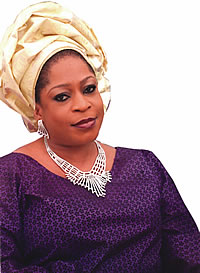 In Nigerian politics, you don’t necessarily need to be intelligent, intellectually endowed or even have the masses at heart to win an election or be in a prime position. All you need is a godfather who can make things work for you like magic. Welcome to the very high octane world of ex-Lagos big girl now turned full-time Abuja politician, Folake Oshinowo.

To understand Fokale’s current predicament, it is very necessary that we demystify her person. Back in the days, Folake Oshinowo was one of the Lagos big girls who took centre-stage placement within the social strata. Firstly, her pedigree was well heeled enough; she is one of the Olunloyo daughters. So being Folake Olunloyo gave her that leverage she needed to access every other name within the social circle. The Olunloyes are one of the prominent families in South-west Ibadan whose profile for lack of space we shall not delve into. But it is her marriage to Lagos big boy Tunde Oshinowo that provided the raw cash that was without doubt the icing on the cake. Her husband, Tunde Oshinowo is the CEO of Tulsa Press amongst many listed and ‘unlisted’ businesses, if you get what we mean.

Tunde a popular socialite is not only toast of almost all fuji and juju musicians but remarkably friends with all the known names within the noveau- riche clique of big boys. Together they graced parties and events like two fairytale peacocks on style exhibition. They are good looking, stylish and have an unmatched panache. Armed with all these credentials, Tunde made a very good decision of sponsoring his wife Folake to the Federal House of Representatives. To achieve this feat, Flakky, as she is popularly called by her friends, retired back to her roots in Ibadan and her family met and negotiated with the Molete power broker, late Alhaji Lamidi Adedibu. As soon as the overlord of Oyo politics gave his approval, the Oshinowos knew it was going to be a walkover victory in their favour. During her campaign for the Ibadan South-west Federal constituency, Folake had a team of young bright boys and girls who went extra mile to ensure that she won that election. This is where the story now begins. After her victory, she was sworn in, in Abuja, and hence resumed work as a federal legislature. While some legislators carry everyone along thereby ensuring that loopholes are blocked and that they are reasonably sure of victory in their re-election bid, some like senator Daisy Danjuma dumps their immediate constituencies and begin to bask in the euphoria of their newly exalted position. The later was the case with Hon. Folake Oshinowo. Folake was alleged to have dumped those who worked tirelessly for her victory including Hon. Saheed Akinade Fijabi (ACN) who came from behind to replace her in the House of Representatives.

Saheed Fijabi was one of the young men that worked so hard to see Folake trounce the opposing candidates at the poll. While some referred to him as Folake’s chief errand man, others called him chief messenger. Indeed, Fijabi was more than a faithful servant, so it was expected that Folake was going to reward him after she won the elections. But contrary to all expectations Folake immediately hired new hands in Abuja. Fijabi not only became a laughing object before his contemporaries but miserable with his boss’s snobbish attitude. Fijabi traveled to Abuja to see Folake who gave him a ‘historical’ reception he never envisaged. Fijabi was pleading with her to just fix him up anywhere at all just so that he could make a good living. Even though Folake was in a position to facilitate this, she bluntly refused and eventually stopped picking his calls. But rather than languish in misery, Saheed Fijabi took a destiny step that most young men will never have considered. He went back to his grassroots where Hon Folake Oshinowo had become very unpopular and began extensive consultations with the elders of the Ibadan South West Federal Constituency. Since Folake was flying the PDP flag, Saheed Fijabi decided to challenge his ex-boss’ re-election bid by flying the ACN flag.

By this time, the heavily financially compromised Lamidi Adedibu who sold the PDP ticket to Folake has passed on so she no longer had that magic wand. During the campaign, Folake was so sure of victory that she saw Fijabi as an inconsequential opposition. But unknown to her, Ibadan was craving for change and true representation.

The D-day came and Folake lost like a pack of badly stocked up cards. The fact that she lost the 2011 election was less significant to the fact she lost to her ex-messenger, Saheed Akinade Fijabi. It was this historical shame that caused Hon. Oshinowo to cry so much that her friends began fear for her safety. But Folake was never going to give up easily, she’s known to be a control freak, so relinquishing her position in Abuja was never going to be a mere election thing. Folake swung into action by lobbying the new speaker of the House of Representatives, Aminu Tambuwal to appoint her as one of his numerous special assistants (SA). It is a very instructive scenario at the Federal House of Representatives. While the young Fijabi is now the occupant of his prestigious office on the 3rd floor of the House of Representatives as the Hon. Saheed Fijabi representing Ibadan South West/North West Federal Constituency, Hon Folake Oshinowo is always seen running errands within and outside the NASS complex for the Honourable speaker. Because in reality, special assistants and special advisers are more or less glorified ‘house helps’. They run errands on behalf of their masters. As far as Hon Oshinowo is concerned she would rather even sweep the National Assembly premises than quit back to either her local constituency or the social circle where she will be seriously mocked.