Vice President Yemi Osinbajo is once again at the cynosure of all eyes in Nigeria as he assumes duty as the acting President of the Federal Republic of Nigeria.Osinbajo has indeed earned the trust of his boss right from the time President Muhammad Buhari agreed to steer the affairs of the country together with his able running mate. However, leaving the affairs of a country to someone who is not a career politician like Osinbajo has always been a source of worry for the president. 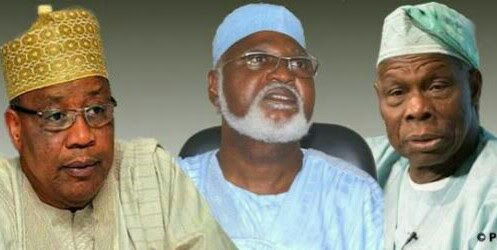 However, the fear of President Buhari was doused at a meeting recently which had in attendance the three main rulers of Nigeria. Former Presidents Olusegun Obasanjo, Ibrahim Babangida and his cousin, Abdul Salam Abubakar met with President Buhari behind closed doors for three hours inside the Aso Rock villa penultimate week and the three former presidents according to inside sources advised the president to repose full confidence in his vice.

Global News gathered the three musketeers (former presidents) allegedly implored President Buhari not to see Osinbajo as a political minor and one that cannot be trusted with the affairs of the country at any particular point in time.

The President who was alleged to have said to Osinbajo times without number to be wary of “politicians” who may want to see him as a soft target for this administration is said to be tinkering with the idea of stepping aside for Vice President Osinbajo in the coming months. The former Presidents we gathered called for the meeting with the president in order to put heads together and address some burning issues within the polity.

We also gathered that these former presidents had a heart to heart talk with President Buhari on the need to take another deserved medical leave abroad and let Vice President Osinbajo take charge in his absence.

The dust raised by the issue is not likely to settle any time soon as the Senate, the judiciary and top civil rights activists like legal luminary Ebun-Oluwa Adegboruwa have openly said the the term “Co-ordinator” used by the president (in his letter to the Senate) instead of Acting President will not only whip up unnecessary ethnic and divisive sentiments but will cause a lot of brouhaha within the polity in the days ahead.