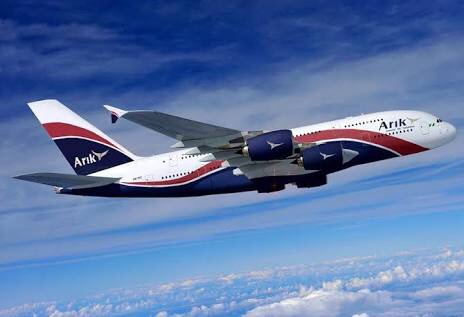 Arik Airlines is fast becoming a disgrace to itself, management and entire staff. The airline which used to be the pride of the country is now a shadow of its old self owing to how the once respected airline is degenerating from bad to worse in terms of service delivery to its customers.
Global News can authoritatively reveal that Arik Airlines is now on a downward trend due to poor and depreciating services being meted out to passengers. Still one of the leading airlines in Nigeria. Arik is now virtually crumbling and running out of business owing to incessant flight delays and cancellations.

This indigenous Nigerian airline floated some years ago by Sir Arumemi-Ikhide has left its vision of quality of service and excellent customer care and has completely degenerated with series of bad trend of flight delays, cancellations and shoddy operational services.
The airline which once prided itself of having more than 10 million passengers on board domestic, regional and international services as at September 2012 is constantly losing its passengers to other airlines due to negligence and customer dissatisfaction.

It is now commonplace for helpless passengers of Arik Air to be left in the departure lounge for hours to sit and watch other passengers with departure time far behind them board and even arrive their destination before Arik takes off most days of the week.
Most of the times Arik passengers rarely get apology and or explanation in the case of flight delays that run into hours and no refund in the case of cancellation even when passengers have lost important appointments which are usually the reasons most of them fly. Sources close to the management of Arik say even the management of Arik is bereft of ideas as it finds it difficult to check or reverse the trend which sadly is being profited from by rival airlines.

A very big boy in the telecommunications industry who is also an image-maker recently lambasted the Airline on social media out of frustration as he had to endure an agonizing five hours of flight delay on Arik’s Lagos-Abuja flight.

We also have it on good authority that many customers are calling on the Minister of Aviation to as a matter of urgency look into the activities of the airline which is no other than a smart way of defrauding Nigerians of their hard-earned monies without getting the services they are paid for.
As a matter of fact, our reporter who went to some local airports in and around the country on a fact-finding mission and to conduct a mini opinion polls about Arik Airline was bombarded with many disenchanted and disillusioned Arik customers who did not mince words whilst saying their minds about how Arik is just collecting money without rendering the commensurate and required services.