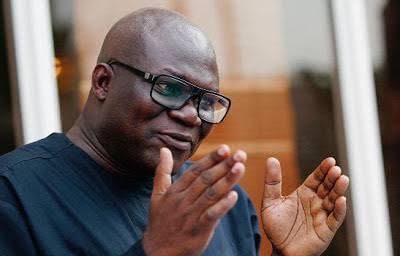 The fear of President Muhammad Buhari is now the beginning of wisdom for the once vocal and active Reuben Abati. The former spokesman of ex-President Goodluck Jonathan is currently not lying low as it appears to most people but the revered wordsmith is seriously working underground and using every means necessary to plot
his way out of the prison’s door this administration has already opened for him.

Global News can authoritatively reveal that Dr. Reuben Abati is now in serious talks with the Governor of Ogun State Ibikunle Amosun and the brief for Amosun is to help him beg President Buhari to spare him jail as Abati has a case to answer at the Economic and Financial Crimes Commision (EFCC).

And according to a Global News source close to Ibikunle Amosun, Abati spent close to two hours behind closed doors at Amosun’s house in Ibara GRA Abeokuta during Christmas holiday. Their meeting which was held in the private living room of Governor Ibikunle Amosun according to our reliable source was fruitful for Abati because he was all smiles when the door of the living room was opened for people to enter. Amosun was also seen to be using his body language to calm down Abati.

However, we have also gathered that Abati is not resting on his oars as yet on the matter as he is said to be in talks with other opinion leaders who are close to President Muhammad Buhari who may want to his own pound of flesh because of the way Abati attacked the All Progressive Congress( APC) and indeed the person of Buhari in the run up to 2015 general elections and shortly after it.

You may want to recollect that Abati had already implicated himself when he was quizzed by the EFCC last year in relation to the arms deal saga.Abati had said he collected the sum of fifty million Naira which he gave some media houses across the country as PR money. Although he was released shortly afterwards, his case file with the anti-graft agency is yet to be closed. And this may be why he is trying to curry the favour of President Buhari’s man Friday in the South-West.

On the other hand, our source also hinted that Abati might be looking for a soft landing by crossing the carpet to the ruling All Progressive Congress through Governor Ibikunle Amosun as the “politriking” and politicking of 2019 elections is gradually gathering momentum.