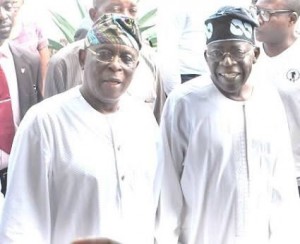 The nation’s political landscape is fast changing than initially envisaged and the South-West of Nigeria is taking the lead in what analysts have dubbed the regrouping of main players and bigwigs.The big news here is the recent cross-carpeting of the former Ogun State Governor and chieftain of the Social Democratic Party(SDP), Aremo Olusegun Osoba who has just retraced his steps by forming alliances with his old ACN group by rejoining the ruling All Progressive Congress in a bid to consolidate his position in the gateway state as a political titan. Osoba’s move seen by many as a deft move engineered by the de-facto political supremo of Nigerian politics,Asiwaju Ahmed Bola Tinubu to further strengthen his hold in the South-West.The calculations and maneuverings of Tinubu by succesfully convincing Osoba to join ranks with him will definitely change the political dynamics of Ogun State,nay Nigeria.With the growing power and influence of the incumbent governor of Ogun State, Senator Ibikunle Amosun in the APC in this part of the country and his closeness to President Muhammad Buhari,Tinubu sees the need to cut Amosun to size and retain his political dynasty which is being dented by the political realities of the recent times. It must be said that Governor Amosun has warmed his way into the heart of Buhari and holds the aces in the latter’s political decisions,thoughts and actions.His growing influence in Aso Rock Villa is both enviable and challenging to the authority of the Jagaban of Borgu. Moreover, Amosun has pitched his tent with the new brigades that Buhari has lined up to curtail the larger-than-life influence of Tinubu in the political scheme of things in the country.With the likes of the Minister of Power,Works and Housing,Babatunde Raji Fashola, the Minster of Mines,Kayode Fayemi – who are seen as the new kids on the block- forming a strong alliance and fast becoming a powerful political block in the south-West that is being used by President Buhari to further checkmate Tinubu.

On his part however,Asiwaju Bola Tinubu who has been watching the developments in the polity and seeing that his position is being undermined in the South-West by the presidency has quickly called on his political wizardry by tapping Osoba who is seen as a game-changer in the evolving dynamics of Ogun State politics.With his political pedigree and antecedents,Osoba remains a powerful voice and one to reckon with when it comes to result-oriented political antics and maneuverings.And the real reasons why Tinubu needs him more than ever before may not be far from the need to curtail Amosun and strengthen his hold in Ogun State and indeed the South-West. Matter of factly,Tinubu is not taking chances on his position and political permutations as regards the race to 2019.Most analysts believe Amosun because of his closeness to Buhari might want to subtly cut away from Tinubu by aligning with other emerging power blocks in the Oodua States and pick his own successor and further undermine Tinubu’s clout.Global News also gathered that the absence of Amosun at the reconciliatory meeting of Aremo Olusegun Osoba with the All Progressive Congress party cheftains was all planned by Tinubu in other to send a strong message to Amosun that he indeed is in control of things.The way things are developing between Tinubu and Amosun is interesting and the duo are mapping out strategies to outwit each other. And as it is his custom to always think into the future,Tinubu is not resting on his oars and this explains why Osoba comes handy in this political chess game that is unfolding.It must be noted however that it is a win-win situation for Tinubu even if Osoba has used his son whom he has groomed for the number one position in Ogun state as part of the bargaining chip for his latest move,Tinubu still remains the underground daddy who calls the shot.