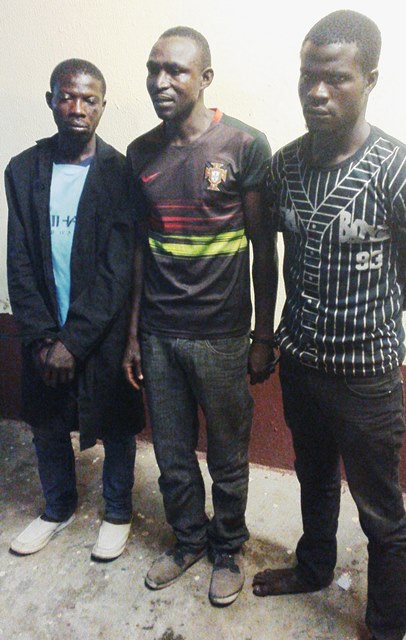 A vulcanizer arrested along with three other suspected robbers by the operatives of the Rapid Response Squad of the Lagos State Police Command, has disclosed that he ventured into robbery to raise money for food and graduation ceremony.

The vulcanizer, Oluwatimileyin Okunnade, 21, from Ogbomosho, Osun State was arrested yesterday around 8:00 p.m. in traffic by the police after snatching an Infinnix Hot Note from a lady driving a white Sienna space bus.

According to him, “I went to Ojodu – Berger Bus Stop early in the morning to look for work. I was there till evening, yet there was no work. I decided to trek home.

I got to Otedola Bridge, there was traffic and I realized that I had not eaten anything since morning.

The thought of going to bed without food was scary to me, so I saw a lady holding an Infinnix Hot Note and I snatched it from her.

She was so scared, she drove off but I was surprised later when RRS men chased and apprehended me few minutes later”.

Insisting that he was not a robber but a vulcanizer, Okunnade said “what I was looking for was money to do my freedom ceremony.

I have spent eight years with my boss. And, he has told me openly to go and source for money for my graduation.

That was why I was looking for daily job to engage myself.
“I ran away from Ogbomoso to Lagos to eke out a better life for myself.

I realised that bus conducting and joining bad gang won’t yield me anything to give my family a befitting life, so I enrolled myself as an apprentice vulcanizer, and I was doing well until my boss sent me away because of my freedom money.

I had earlier got a daily job beside my boss with a fellow vulcanizer, my boss grew apprehensive that I was going to steal his customers, so he told them to send me away”, he added.

The arrest of Okunnade yesterday brought to four the number of suspects apprehended only yesterday over robbery offence in Otedola Bridge area.

The operatives had around mid – day arrested a three – man gang comprising: Bola Adenuga, 39; Kehinde Oladipupo, 32 and Afiz Sulaiman, 27, for forcefully stealing an hydraulic jack and vehicle part from a lorry driver for failing to give them money.

Adenuga, the leader of the gang disclosed to investigators that they assisted “the truck driver by assisting him to repair his broken down vehicle but when his truck started working, he declined to give us money, so we took his hydraulic jack and lorry bumper.

When he has money he can come and collect it. We have told him where he can find us. We are bricklayers”.

Speaking on the robbery, the Police Public Relations Officer, SP Dolapo Badmos stated “if you think you can come to Lagos to perpetuate crime and get away with it, you better wake up.

The Command is alive to its responsibilities. No criminal would go scot free in Lagos. We would track and get you”.